A packed room of Cambria residents released an audible gasp Saturday as they learned the results of a new disaster study that revealed it would take about four hours under ideal conditions to evacuate.

According to the Cal Poly report, it would take residents of the Lodge Hill neighborhood over three hours just to travel the 1.5 miles from home to Highway 1.

“I wouldn’t say they should be afraid of it, they should be aware of it and plan accordingly,” San Luis Obispo County Fire Safe Council Business Manager Dan Turner said.

Turner presented the findings of the study on Cambria’s wildfire evacuation strategy to more than 100 people at a meeting Saturday in the town’s Veteran’s Hall. 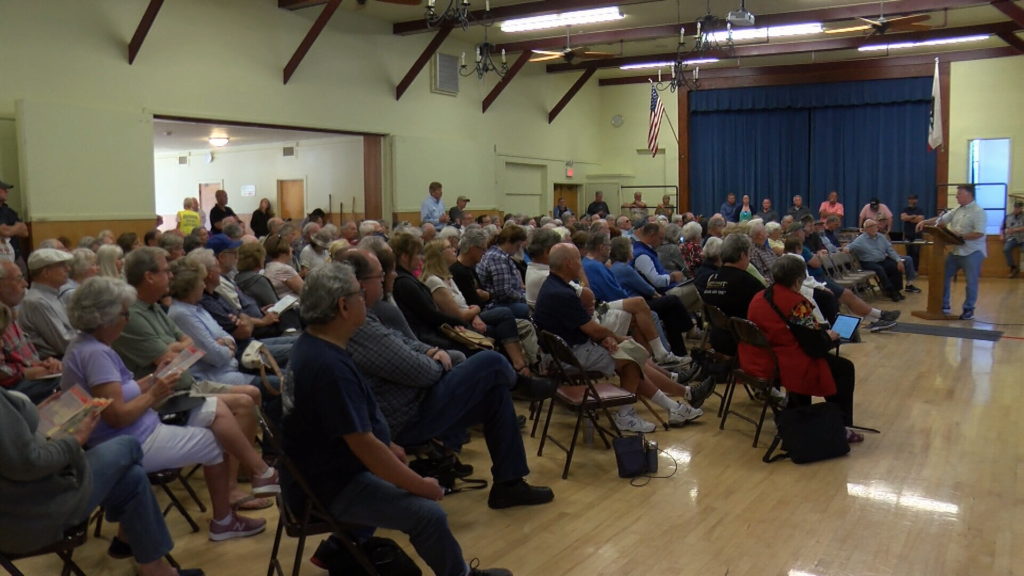 The report examined evacuation routes and delays, as well as challenges presented by the town’s aging demographic.

Turner said Highway 1 typically sees about 700 vehicles per hour in either direction and an evacuation of Cambria would create what he called a “choke point” for traffic flow.

“We only have one major highway coming into the community and limited ways of getting those people out,” Cambria Fire Chief William Hollingsworth said.

Situated in a native pine forest, the seaside village of Cambria is a potential hotbox made more dangerous by its complicated streetscape.

“In an emergency evacuation, we recommend you leave in the seventh inning, maybe the third or fourth inning,” Turner said.

The Fire Safe Council is looking at ways to control southbound traffic on Highway 1, as well as educate people on the locations of refuge within Cambria for those who can’t evacuate.

The landscape is not only problematic for an evacuation, but hinders authorities from warning residents in the first place.

“There’s a lot of people in the community, especially because of the terrain here, who don’t have cell service and so they still rely heavily on landlines or wired phones,” Hollingsworth said.

Landlines are susceptible to outages caused by wildfires and they can’t receive the text notifications sent out during emergencies.

PG&E also explained to residents the utility’s plan to shut of power when fire conditions are extreme.

The study also found that about a quarter of Cambria residents are unable to drive away from danger themselves due to their age.

“You have car-less folks… that don’t drive, children that don’t drive that might be left at home,” Turner said. “What’s the plan for them? So it’s neighbor helping neighbor is a critical part.”