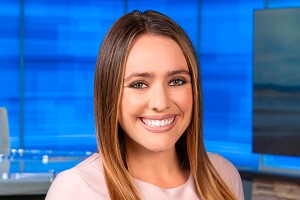 Alexa Bertola is thrilled to be working as a multimedia journalist on the Central Coast, telling stories that impact the community she cares so much about.

She grew up in San Diego where at a young age she discovered her passion for telling stories, writing journals and reading. Even at the age of 11, Alexa could be seen filming a news segment on a wildfire in her hometown of Oceanside.

Alexa earned a literary journalism degree with a minor in global cultures from University of California, Irvine. Her favorite part of college was studying abroad in Tuscany for a summer where she was able to learn more about her Italian roots.

After college, she worked for KUSI-TV, the station she grew up watching with her parents. Alexa was later a writer and producer at that station. She later worked as an associate producer for KFMB-TV, also in San Diego.

The inevitable move from San Diego took Alexa to Humboldt County to work as a reporter and weekend anchor for KIEM-TV.

She eventually made her way to San Luis Obispo and KSBY in June of 2016, where she hopes to stay and plant her roots.

In her spare time, Alexa loves to hike, try new foods, go wine tasting, travel and spend time with her family and friends.