Good Friday has new meaning in Paris after Cathedral fire

Paris — The Good Friday processional has a new meaning in France today after the devastating fire at the Notre Dame Cathedral this week.

Clergy and believers will gather along a bridge that connects the landmark to the rest of Paris for the stations of the cross, which recount Jesus’ road to his crucifixion.

The Diocese of Paris said that the Crown of Thorns, a relic believed by some to be worn by Jesus, will be part of the procession.

Other treasures such as the tunic of St. Louis were reportedly rescued by a human chain of firefighters. 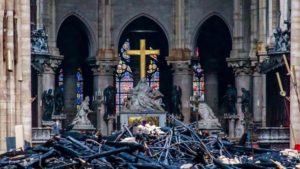 Possible cause of fire?

Speaking during a meeting of local business owners, Patrick Chauvet did not elaborate on the glitch, adding that “we maybe find out what happened in two or three months.”

Le Parisien newspaper has reported that investigators are looking at whether the fire could have been linked to a computer glitch, or related to the temporary elevators used in the renovation work, among other things.

Chauvet added that investigators are still unable to access the cathedral’s nave for security reasons. 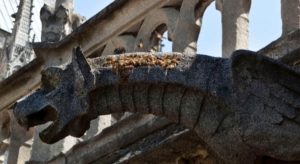 Thousands of bees in hives on the roof survived the blaze

The 180,000 bees kept in hives in Notre Dame Cathedral that were thought to have perished in this week’s fire have been discovered alive.

The monument’s beekeeper, Nicolas Geant, told the AP Friday: “I am so relieved. I saw satellite photos that showed the three hives didn’t burn. I thought they had gone with the cathedral.”

Geant has looked after the bees since 2013 when they were installed on the lead roofing of the famed monument as part of a city-wide initiative to boost declining bee numbers.

Geant explained the insects have no lungs. Instead of killing them, the carbon dioxide in the smoke puts them into a sedated state. He said when bees sense fire they “gorge themselves on honey” and protect their queen. He said European bees never abandon their hives. 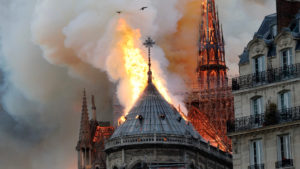 The Paris prosecutor’s office is urging those making donations for the reconstruction of Notre Dame cathedral to be careful about scams aimed at extorting their money.

It says the Fondation du Patrimoine, one of the organizations collecting funds to rebuild the iconic monument, has filed a lawsuit after individuals “fraudulently” solicited money using its name through emails or phone calls. The Paris prosecutor’s office has opened an investigation centered on the charge of conspiracy to defraud.

Officials say $1 billion in donations has already been pledged to rebuild Notre Dame, sent in by people ranging from ordinary citizens to billionaires.