With the launch to Mars from Vandenberg Air Force Base approaching soon, Allan Hancock College dedicated the first student-created murals at its Lompoc campus that just happen to pay tribute to space exploration.

On Tuesday afternoon, the school held a special ceremony at its Lompoc Valley Center. There, school administrators unveiled the work of former Hancock student Ruben Espinoza. He painted two murals called "Looking for the Future" and "Unknown Endeavor."

Espinoza said the missile in the first painting represents the launching of a student’s academic career at Hancock, the woman’s red shirt represents the local fire academy and her blue slacks represent the police academy. 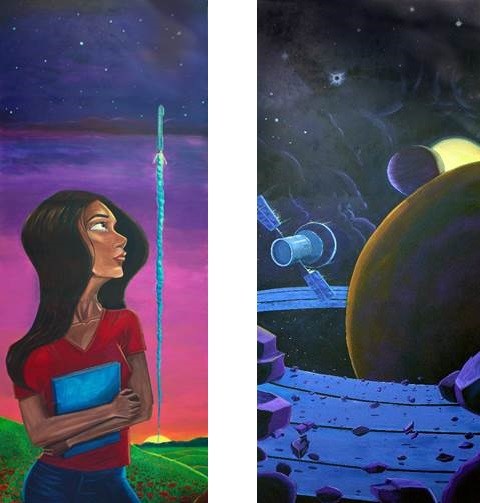 According to his website, Espinoza works as a freelance animator. He has worked on prop designs for Nickelodeon and Dreamworks studios. He also has done layout and color design for Warner Brothers Studio.

The mural dedication is part of the college’s Mars Week, a series of free activities, open to the public, to celebrate NASA’s historic launch to Mars from Vandenberg. NASA will host interplanetary exhibits inside the Rabobank Student Center on the Santa Maria campus on Thursday, May 3, from 12-4 p.m., and again from 1-8:30 p.m. on Friday, May 4. Visitors can experience space travel and realistic views of planets through virtual reality and computer simulation. Moon rocks and meteorites will also be part of the exhibit. Mars Week wraps up with Friday Night Science from 6-8:30 p.m. at building M on the Santa Maria campus.