A Public Records Act request for the information by Holland’s family was initially denied. The family wanted to know when Parkinson knew Holland was placed in a restraint chair.

Holland, who suffered from schizophrenia, died from a blood clot on Jan. 22, 2017, after spending nearly two straight days in the chair. Parkinson has said Holland was initially placed in the restraints because he was repeatedly punching himself in the face.

The sheriff also said he did not know about Holland’s situation until the Sunday he died, but the Holland family claims Parkinson told them he knew what was happening on Friday, the day Holland was restrained.

County Counsel Rita Neal says the telephone records were initially considered to be protected from public disclosure but the sheriff has decided to go ahead and release them.

In a letter sent to local media and the Holland family, Neal goes on to explain that the sheriff received a text message at 5:21 p.m. on Sunday, Jan. 22, 2017, while he was attending an event sponsored by the Women’s Shelter Program. A series of phone calls between the sheriff, dispatch, and custody staff followed. 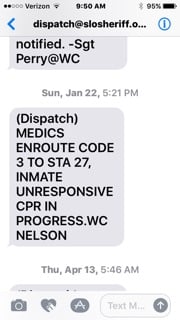 The call log does not show any calls from the jail between 5:50 p.m. on Jan. 20, when county officials say the incident involving Holland began, and the text message received on Jan. 22.

See below for a copy of the cell phone bill and an explanation of the calls provided by San Luis Obispo County: