The newly rebuilt section of Highway 1 through Big Sur is already beginning to crack in some places.

The highway was closed for more than a year after a massive landslide wiped it out on May 20, 2017.

Caltrans says it’s aware of the cracking on the brand new road and they’re monitoring it closely.

"It’s pretty impressive, the scale of the cracks just having opened just so recently," said Caleb Morche, who is visiting from Seattle.

There are several large cracks on the stretch of the iconic road that recently underwent a $54 million rebuild.

"It’s quite concerning because I imagine this is a pretty busy route with so many tourists passing through the area," added Chanelle Tourish of Ireland.

Caltrans says there’s no need to worry and that they are surface cracks, just superficial damage on the four-inch layer of road.

"We did expect that," said Susana Cruz, Caltrans District 5 spokesperson. "Just like when we first started doing the revetments and the erosion took over, Mother Nature has to adjust to how humans tamper with the environment." 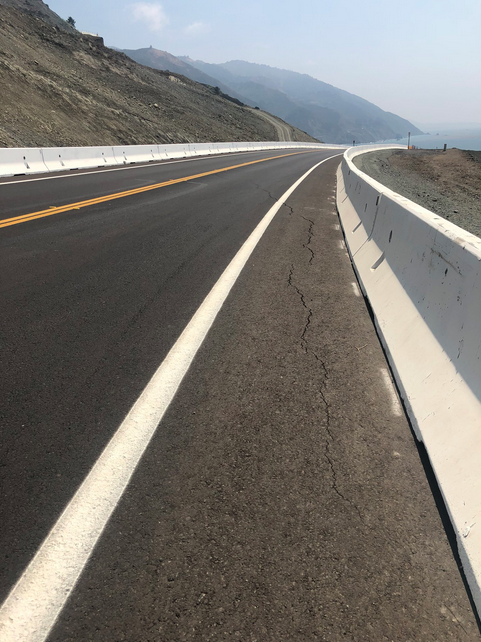 Cracks can be seen in some areas along a newly rebuilt section of Highway 1 through Big Sur. (KSBY photo)

Caltrans explains the hillside is still moving and it will take a couple of winters to stabilize.

You can see new cracks along the hillside, too.

"Looking at the dirt sliding down the hill, it’s just a bit scary to see it in that way so early," Morche said.

Caltrans says in order for the road to be shut down again, signs of another potential landslide would have to appear.

Officials say travelers can continue to use the road with no problem.

"The roadway is driveable. I mean, safety is our top priority and we’re not going to endanger anybody. If anything, we would have closed the roadway if things were really to become a structural damage but they’re not," Cruz continued.

"If it becomes an area of concern then we will address it and we are still monitoring it all the time," Cruz said.

Road construction crews will be in the area for up to a year.

Thursday afternoon, KSBY spoke with the owner of John Madonna Construction, which built the road. He reiterated that the cracks were expected and there’s nothing to be concerned about.

Caltrans adds that cracks along Highway 1 are common, especially in spots where there is slide activity.