Almost 5,000 freshmen unpacked their bags and returning students settled in for a new school year, but they are also entering a double fine period that started early 12:01 a.m. September 14th and runs until 7 a.m. September 24th.

SLO’s safety enhancement zone is designed to crack down on partying during certain times of the year.

"Kids are getting back that are coming back from the years previous, and they tend to over consume alcohol, throw large parties and really things that are not only disruptive to the neighborhood, but can be dangerous,” explained Lt. Fred Mickel, San Luis Obispo Police Department.

You could pay twice as much for certain crimes, including those listed below. 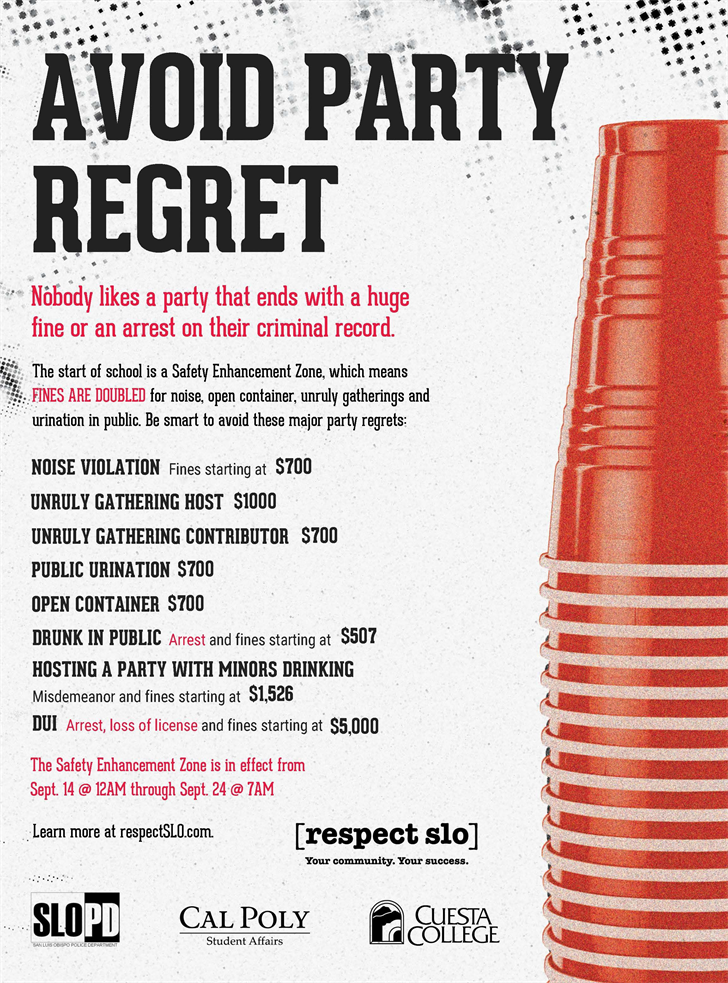 Both police and the Cal Poly administration say the crackdown has been very successful since taking effect in 2013.

"Five years ago, we had 35 students hospitalized for alcohol poisoning during the Week of Welcome. Last year we had zero,” said Keith Humphrey, Cal Poly’s Vice President of Student Affairs.

Some think the 10-day safety period is a positive way to start the school year.

"I definitely think it’s a good way to start the attitude that the faculty has towards their students, and the kind of environment they want to create,” said Margo Thornton, a Cal Poly freshman.

Some students say it’s too long, while others say it’s a good transition for newcomers.

Whether you’re starting your college career or close to finishing it, police remind everyone to party smart.

"You might be having fun now, but we want to make sure that you can go on to be a professional adult in some career and not be turned down for a job because you drank too much and got arrested,” added Lt. Mickel.

Police also encourage students to use the buddy system when they go out, have a designated driver and be respectful of the neighborhoods.

Double fines are also applied around Halloween, St. Patrick’s day and other holidays.