One of the two satellites that underwent testing and preparation at Cal Poly earlier this year has made history with a photo it took of Mars nearly 250 million miles from Earth.

The two satellites are called MarCO-A and MarCO-B. MarCO stands for Mars Cube-One, although the satellites’ engineering teams nicknamed them “EVE” and “Wall-E.” Wall-E’s wide-angle camera captured the image of Mars on October 3. It was the first image of the Red Planet ever taken with this class of low-cost spacecraft.

The satellite’s camera looks out from the deck of the CubeSat, and in its image, Mars appears as a small red dot to the right. To take the picture, engineers programmed the CubeSat to rotate in space so it faced Mars. After several test shots, the engineers saw the red mark they were looking for.

The image was taken around eight million miles from Mars, a moving target as it orbits the sun. 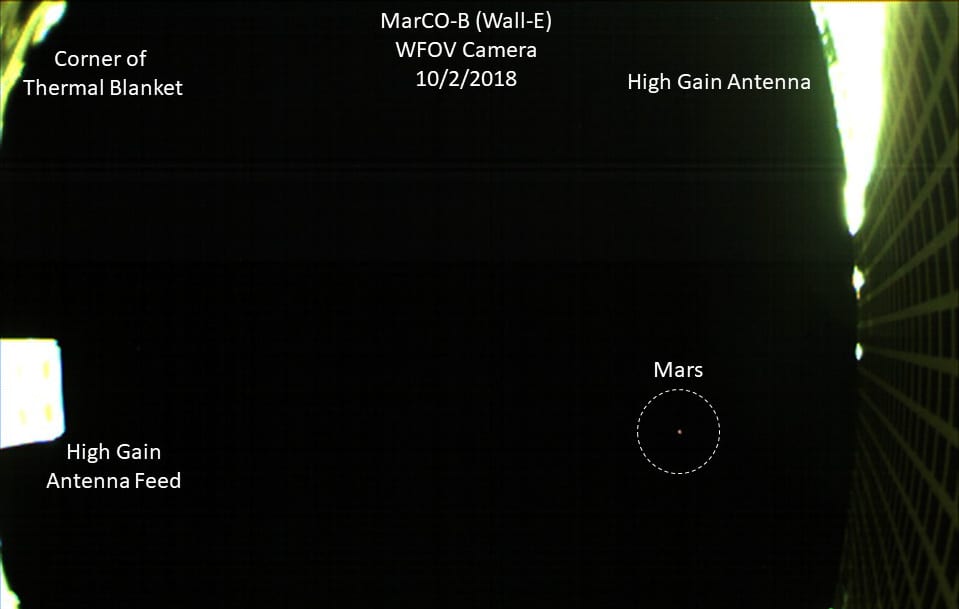 The MarCo mission is led by NASA’s Jet Propulsion Laboratory in Pasadena. It hopes to capture more images as the CubeSats approach Mars ahead of the planet’s expected November 26 flyby.

The CubeSats still have to move roughly 53 million miles to be in place for InSight’s landing on Cyber Monday. Insight is NASA’s first mission dedicated to studying the interior structure of the Red Planet, and the first interplanetary mission launched from the West Coast. The satellites launched on May 5 from Vandenberg Air Force Base on the same United Launch Alliance Atlas V rocket as NASA’s Interior Exploration using Seismic Investigations, Geodesy, and Heat Transport lander.

“We’ve been waiting six months to get to Mars,” said Cody Colley, MarCO’s mission manager at JPL. “The cruise phase of the mission is always difficult, so you take all the small wins when they come. Finally seeing the planet is definitely a big win for the team.”

CubeSats have a standardized small size and use off-the-shelf technologies. Many are made by university, and sometimes high school, students. The standard was created by a Cal Poly professor and his counterpart in 1999 at Stanford University to promote and develop skills for creating small satellites.

The first CubeSat was launched in 2003. Since then, more than 700 have entered Earth’s orbit on launches of larger spacecraft.

“Nobody would have imagined that 10 or 20 years ago,” said Ryan Nugent, a staff aerospace engineer at Cal Poly.