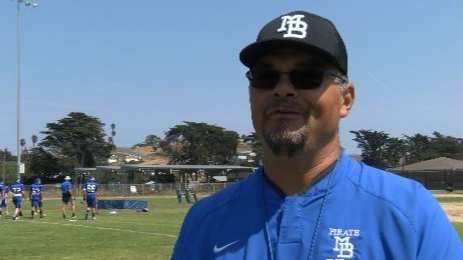 KSBY reached out to Kelley for comment, but he referred us to the principal.

In a letter sent to parents on Tuesday, the principal says an incident happened on the afternoon of October 24. He says there was an “unacceptable verbal interaction that was insensitive to the LGBTQ community between a coach/teacher and a student-athlete on our campus.” The letter did not specifically name Kelley, but Principal Kyle Pruitt told KSBY the head varsity coach was involved in the alleged incident. Pruitt says other students were present at the time.

Pruitt says Kelley was relieved of coaching duties, and the school is looking for a new head coach.

Kelley was not at Friday’s final football game of the season. The team went 1-9 overall and 0-5 in Ocean League. Kelley had been the head coach for four years.

Principal Pruitt says it is his responsibility to ensure students feel welcome and safe at school.

One parent said the school handled the situation well.

“They were clear, it was undeniable their stance on it and they did it swiftly and with respect for all the people involved including the coach,” said Julia Valentine, a Morro Bay resident.

Pruitt says in August, there was an all-staff meeting focused on equity and social discourse, and employees were told to make sure schools are filled with tolerance, kindness, fairness, and care.

“All kids need to be safe at Morro Bay High School and by safe meaning a safe place to come and be excited and be a part of and comments marginalizing to other students or other populations are not making people safe and it’s not okay,” said Pruitt.

According to the principal, staff at Morro Bay High School will reflect and talk about these types of issues on November 2. Guest speakers from the transgender community, the disabled community, and the health and wellness community will be there. The principal says the event was scheduled before the October 24th incident.

Pruitt apologized to everyone affected by the incident and said he would work on preventing these incidents in the future.

In a statement to KSBY, Principal Pruitt said, “I have a zero-tolerance policy with this kind of inappropriate action.”