The first happened at approximately 9:20 p.m. at the Sandpiper Liquor store in Summerland.  Witnesses said a white man in a ski mask pulled out a handgun and demanded money from the cashier.

As deputies were searching the area, they received a report of a second armed robbery at City Market on Carpinteria Avenue.

Witnesses described a similar circumstance, the man pulled out a gun and demanded money. 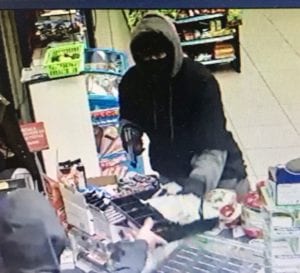 Deputies and a K9 team searched the area but were not able to find him.

He is described as a white man with blue eyes, approximately 6 feet tall and 180 pounds. He was wearing a dark grey hoodie with a black t-shirt, khaki cargo shorts and white shoes with black socks.