Update ( 5:45 p.m.)- Crews worked through the afternoon to remove at least one boat that washed ashore in Port San Luis Saturday morning. 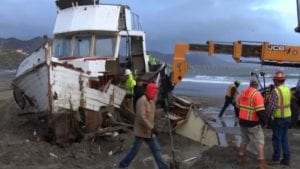 The boat appeared to have severe damage. It’s unclear where the remains of the boat will be taken.

At some point during the storm, two boats got loose from their moorings and washed ashore near Avila Beach in Port San Luis.

The U.S. Coast Guard station at Morro Bay says one was the commercial vessel “Saturnia”, the other is a private, recreational boat.

A Coast Guard marine safety detachment will be inspecting both boats for any pollution leaks.

The owners of both boats will be responsible for the costs of removing the boats from the beach but there is no timeline on when that will occur.

The Coast Guard says they had no other reports of issues on the water during the storm.