SANTA BARBARA (AP & KSBY Staff) — A 7-foot sea creature that washed ashore in Goleta two weeks ago has been identified as a hoodwinker sunfish, a recently identified rare species thought to live in the Southern Hemisphere.

The University of California at Santa Barbara said an intern spotted the stranded fish at Sands Beach in the university’s Coal Oil Point Natural Reserve.

The intern alerted Jessica Nielsen, a conservation specialist at Coal Oil Point, who initially thought it was a type of local sunfish and posted photos to the reserve’s Facebook page.

That drew the attention of Dr. Thomas Turner, an associate professor in UCSB’s ecology, evolution and marine biology department who examined the fish and posted photos to the iNaturalist online community.

That caught the eye of Marianne Nyegaard of Murdoch University in Australia, who identified the species in 2017 and formally named it Mola tecta but gave it the hoodwinker moniker because it had somehow escaped scientific recognition.

Nyegaard told UCSB in an email that she discussed the images with ichthyologist Ralph Foster of the South Australian Museum but was reluctant to identify the fish as a hoodwinker because the photos didn’t clearly show distinctive features and because it had turned up so far out of its known range.

Nyegaard sent specific instructions to California about what to photograph and tissue samples that should be taken.

Turner and Nielsen were glad to help, but first they had to find the fish, which had been moved by the tide, according to UCSB.

They walked from opposite ends of the beach and found it several hundred yards from its original position.

Nyegaard said she ended up with a large number of extremely clear photos. 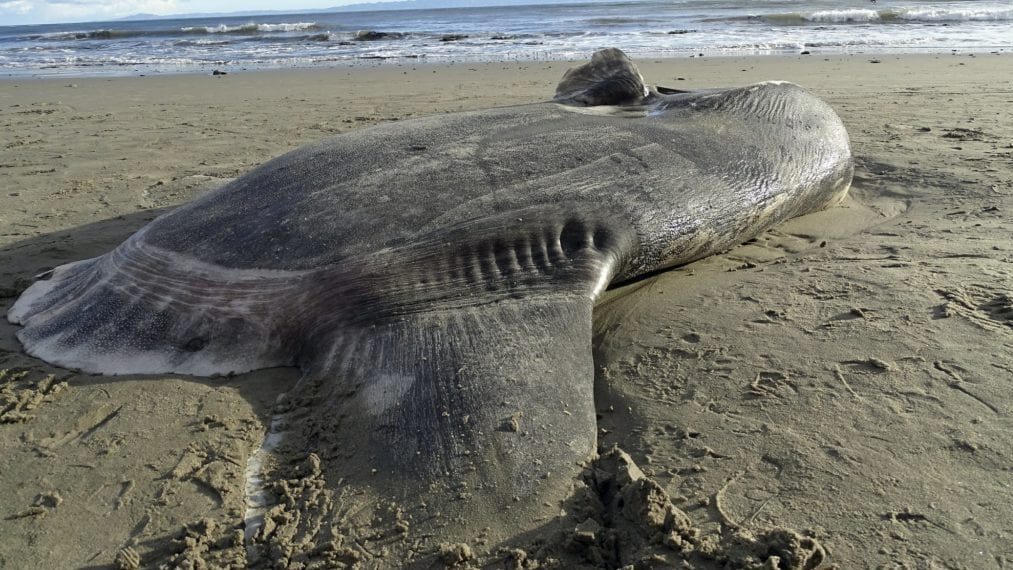 “I literally, nearly fell off my chair (when I saw the pictures),” she said in an article on the UCSB website titled “Hoodwinked.” “Tom Turner and Jessica Nielsen had indeed found the fish and had photographed and examined it, and taken a tissue sample. A huge amount of extremely clear photos was in my inbox and there was just no doubt of the ID. They had also examined the clavus by hand to confirm the number of ossicles, which was just brilliant.”

Nyegaard added, “Eyes and ears and hands on the ground half a world away — wow.”

Though it is unclear how the Mola tecta ended up so far from its known range in the Southern Hemisphere, having definitive identification is a crucial first step. And thanks to an enterprising conservationist, an organic collaboration between scientists near and far, and good old-fashioned social media, that ID is now confirmed.

“It really was exciting to collect the photos and samples knowing that it could potentially be such an extraordinary sighting,” said Nielsen. “Mola tecta was just recently discovered so there is still so much to learn about this species. I’m so glad that we could help these researchers make the final definitive ID.

“This is certainly the most remarkable organism I have seen wash up on the beach in my four years at the reserve,” she added.

According to Thomas, the fish was just over 7 feet long and slightly wider from fin tip to fin tip. Its dorsal fin was just under 2½ feet long. He did not weigh it.