Scenic Moonstone Beach is a popular spot for visitors to collect rocks, shells, and take in views, but one seasonal visitor has beachgoers taking a second look.

“They were extraordinary. I saw one with blue on it and clear ones, they were really cool,” said Bailey Bewett, who was visiting the beach with her family.

“I didn’t know if it was litter, like a plastic substance,” said Lauren Devitis, an Orange County resident. “It’s just kind of a white substance and it’s everywhere.” 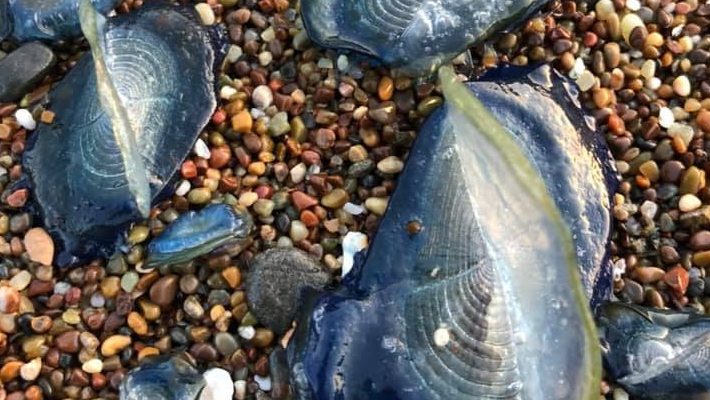 The jelly-fish like creature is called a Velella Velella, also known as ‘By the Wind Sailors.’ Velellas typically die once they wash ashore. As they dry up in the sun, they’ll turn white or clear.

Velellas are closely related to jellyfish, which leaves some feeling uneasy about getting too close, but Velellas are technically hydroids and they’re harmless to humans.

Lots of these little creatures have washed ashore at Moonstone Beach. They’re called Velella Velellas AKA ‘By the Sea Sailors.’ More about them and why they’re here tonight at 5&6 @KSBY pic.twitter.com/gtkuy7ytOj

“They still have those stinging cells that other jellies do but they’re not as strong, so they’re harmless to humans but they’re strong enough to sting their prey that would be floating along the surface,” said Emily Sampson, Central Coast Aquarium’s Director of Husbandry.

With a body structure similar to a sail, Sampson says the hydroids are swept in with the strong wind this time of year, but they aren’t always so easy to spot. She says they’re typically far offshore.

Sampson says it is safe to touch Velellas, but there’s a chance you could feel some irritation if you have sensitive skin.