Teachers posed with noose at California school, sparking outrage among some parents

A photo of four elementary school educators in Southern California smiling as they pose with a rope fashioned into a noose has led to their and the school principal’s suspension and sparked outrage among some parents. 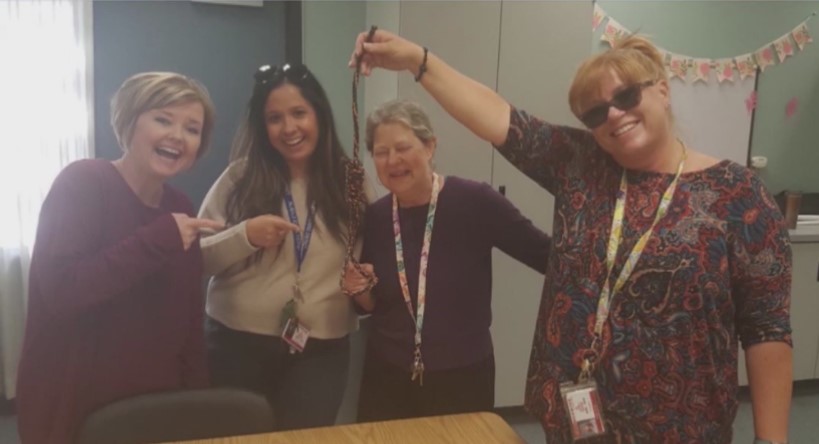 The image of the educators at Summerwind Elementary School in Palmdale, 70 miles north of downtown Los Angeles, was originally emailed by the school’s principal, Linda Brandts, and was shared hundreds of times on email and social media, NBC Los Angeles reported.

Palmdale schools superintendent Raul Maldonado said all five educators have been put on administrative leave, pending an investigation by the district.

“The Palmdale School District holds all employees to the highest standards and expectations,” Maldonado said in a statement to NBC News on Friday. “We will not stop until we find out exactly what did occur. We will not tolerate this type of behavior in our schools.”

The picture of four women, laughing and posing with the noose, was sent by Brandts in an email to all Summerwind staff at 3:50 p.m. on May 1, according to a message reviewed by NBC News.

There was no text inside the email, but the subject line read: “Room 223 score.” It wasn’t clear what was meant by that phrase.

Parents of some African American children at the school told the NBC station they were troubled by the educators’ apparent insensitivity about the association of nooses with Jim Crow-era lynchings.

“I feel like he’s not safe here,” Misty Evans said of her son, a student at Summerwind. “It brings you back to slavery days.”

Another parent, Juan Dillard, said the educators involved should lose their jobs.

“My son is leaving today, and he’s not coming back to this school until they are fired,” Dillard said.

The city of Palmdale is majority Latino, according the most recent census data, at 58.6 percent; whites make up 22.1 percent, and blacks 12.5 percent.

NBC News could not immediately reach members of the Palmdale school board or representatives of the teachers’ union for comment on Friday.

State Assemblyman Tom Lackey, a Republican who used to sit on the Palmdale school board, said the noose pictures are “inconsistent with the culture encouraged” by the school district.

“I am saddened by the negative impacts associated with this,” Lackey tweeted. “I am confident the Palmdale School District will investigate this matter and follow-up with the appropriate actions.”