The U.S. Army Corps of Engineers met Wednesday to discuss the safe removal of ammunition debris and explosives from Camp San Luis Obispo.

The meeting in San Luis Obispo was open to the public for comment and was a way to let community members know what could happen on the former defense sites. 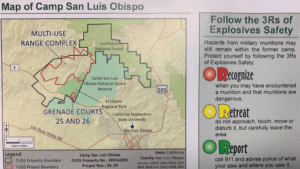 Camp San Luis is divided into nine project areas and Army Corps Engineers are in charge of remediating these properties.

The Corps is investigating two munitions response sites; the Multi-Use Range Complex and Grenade Courts 25 and 26, totaling about 2,700 acres of that land.

Crews are investigating how many explosives and how much munition is in each site and have proposed a cleanup plan for the camp.

The public is invited to review and comment on the proposed plan on June 7.