One man is dead and another man is in custody following a deadly fight in Shandon on Saturday.

Around 5 p.m., 9-1-1 dispatchers received a call about a fight in progress in the 200 block of Escondido Way, according the San Luis Obispo Sheriff’s Office.

“Deputies responded to the scene where they found the victim a short distance away being treated by Cal Fire paramedics,” said Tony Cipolla, SLO Sheriff Spokesman. “The victim was transported by ambulance to a local hospital where he later died from his wounds.”

According to the Sheriff’s Office press release, the 23-year-old victim had been stabbed. 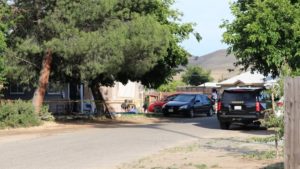 The suspect was originally thought to be at a home in the 100 block of 3rd Street in Shandon. A perimeter was established around the home, according to the release.

Then the investigation changed course after authorities learned the suspect was traveling in a vehicle. Detectives followed the vehicle along Highway 101 and initiated a ‘high-risk stop’ at the 4th Street exit in Pismo Beach.

A ‘high-risk stop’ is when law enforcement pulls over a car and orders occupants out of the car at gunpoint.

The 26-year-old suspect was a passenger in the car and was arrested without further incident. The Sheriff’s Office has not released his name.

The name of the victim has also not yet been released.