An impromptu memorial is growing around the flagpole of the Case Grande Senior Mobile Estates, after a deadly shooting, explosion and fire left five people dead Friday afternoon in Santa Maria.

On Saturday, police confirmed Kurt Bracke, 70, and Richard Hanen,78, were shot and killed outside the clubhouse around Noon on Taylor Street. The shooter fled and a short time later flames erupted at a house nearby consuming three homes and damaging at least one more.

The bodies of three people were found inside the burned mobile home at 407 Taylor. Police believe one of the bodies is the shooter. The names have not yet been released. 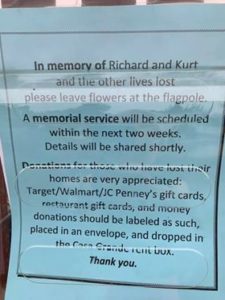 The donation request includes gift cards to retailers and restaurants for those who lost their homes and belongings.

The mobile home park is a somber, sad place Sunday morning as residents grieve and plan the memorial services for Hanen and Bracke, according to one woman who is staying nearby.

Residents are now leaving flowers by the flagpole at the mobile home park in honor of those who died in this incident.

On Saturday, residents who knew the man who lived at 407 Taylor described him as anti-social and angry.

A woman who stopped at the scene said she delivered meals to the man through her work with the Food Bank.

“He was always angry, he had issues and didn’t know how to handle them,” Kalani Young said. She said the man was “troubled” and “needed help.”

According to Santa Maria Police Lt. Russ Mengel, many neighbors agree with Young’s assessment of the alleged shooter. “We’ve been talking to everybody that had encountered him in the park and we’re getting a story that there was some difficulty in the relationship with the individual,” Mengel said. “So that may hold some answers as to why the events occurred yesterday.” 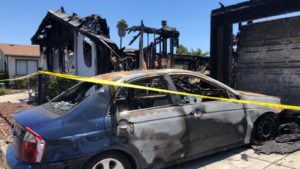 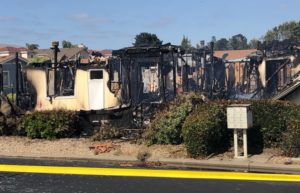