One victim in Thursday night's Gaslamp Quarter shooting was a man who was in the district to watch his son perform at a concert.

SAN DIEGO (KGTV) -- A gunman opened fire at multiple people in the Gaslamp Quarter Thursday night, killing one person and injuring four others before being arrested, San Diego police said.

According to police, officers were dispatched to the 500 block of J Street at around 10:30 p.m. in response to multiple 911 calls reporting shots fired. Police said more calls came in a short time later, “stating that the suspect had walked away and been involved in another shooting at 5th Avenue and Island Avenue.”

Police said a man, later identified as 32-year-old Travis Sarreshteh, of San Diego, walked up to a 28-year-old white man near the valet station of the Pendry Hotel on J Street and then shot him without being provoked. According to police, “The suspect began to walk away, but quickly turned and fired again at the victim.”

The victim had at least one gunshot wound to his upper body when officers arrived. He was pronounced dead at the scene.

During a Friday press conference, SDPD Chief David Nisleit said Sarreshteh proceeded to the 500 block of Fifth Avenue, near Island Avenue, where he confronted a group of people standing outside and then opened fire. Four people in the group were struck by gunfire.

Witnesses said the gunman was purposely bumping into people and starting arguments. Witness Alex Kelly told ABC 10News, “He was just walking by them, kind of in a bad mood and it was kind of like a shoulder brush, and then right after that he was saying, ‘You guys having a good time?’ And that's when he pulled out a gun and he started shooting ... before they even had a chance to react or say a word, that's when the guy pulled out the gun and started shooting."

Nisleit said several witnesses chased Sarreshteh as he fled northbound on Fifth Avenue. He said that two citizens tackled Sarreshteh and, with the help of other citizens, held him until officers arrived.

Officers caught up to Sarreshteh on Fifth Avenue and G Street and struggled with him before one officer deployed a Taser on him, Nisleit said. Once subdued and in custody, Sarreshteh was taken to the hospital “after the Taser deployment and other injuries sustained when he was tackled by citizens.” 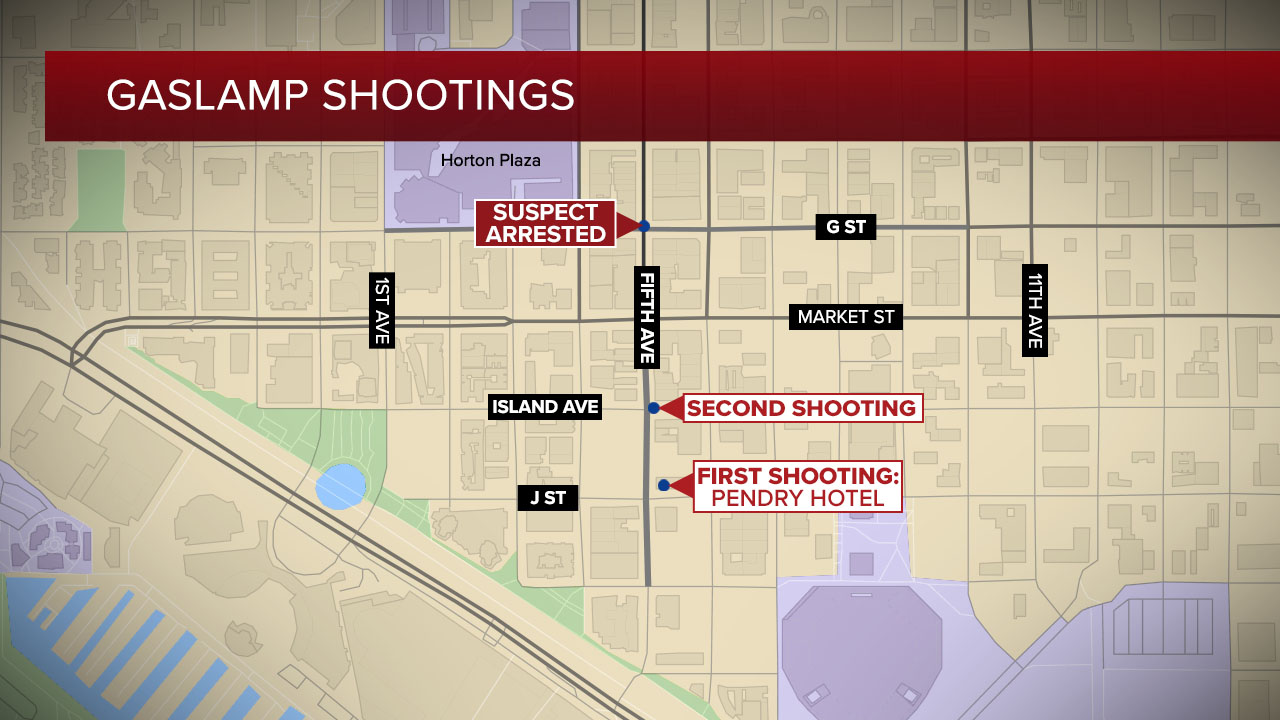 Officers recovered a 9mm, unserialized firearm, also called a "ghost gun," at the scene from Sarreshteh, Nisleit added. He said that the shootings appeared completely unprovoked.

Sarreshteh has been booked into jail on one count of murder and four counts of attempted murder. Nisleit he's not known to officers but has a criminal history.

A 28-year-old white man who suffered a gunshot wound to his arm was treated at the scene. Nisleit said all four people injured are expected to fully recover.

The victim who died at the scene was identified as an ACE Parking employee working as a valet team member at the Pendry San Diego. In two statements to ABC 10News, ACE Parking said they are in the process of establishing a GoFundMe for the victim's family. The Pendry said it is devastated by the shooting:

"Our ACE Parking family is deeply saddened about the incident that occurred last night in the Gaslamp. Our condolences go out to the victim, a beloved ACE employee, and his family. We are working hand-in-hand with the San Diego Police Department to support the ongoing investigation. We are also in the process of establishing a GoFundMe page to support the victim and his family." — Keith Jones, owner and managing partner of ACE PARKING

"On Thursday night, April 22, a shooting incident occurred in Downtown San Diego claiming the life of one of our valet team members, who was contracted through ACE Parking. San Diego Police responded quickly to the scene, securing the area and arresting the suspect. We are working closely with our partners at ACE Parking to support the Police Department’s investigation. Pendry San Diego is devastated by the incidents that occurred last night. We remain committed to the safety and security of our guests and associates. All questions should be directed to the San Diego Police Department as part of its ongoing investigation into the incident." — Pendry San Diego

Nisleit commended the two citizens for their heroism to take down Sarreshteh and hold him until police arrived. He also thanked another citizen, a former combat medic, for rendering first aid to an injured victim from the second shooting.

The scene in the Gaslamp Quarter on Thursday night was described as busy as restaurant capacity limits were recently increased when San Diego County entered the orange tier two weeks ago.

There was no game at nearby Petco Park, as the San Diego Padres were in Los Angeles Thursday night for the start of a four-game series against the Dodgers.