UPDATE (1/16/19) – Caltrans has extended the northern end of the closure at Paul’s Slide to Deetjen’s/Fullers Point until further notice due to slides and spot flooding.

Caltrans says crews will assess the damage in the morning or when the storm passes.

(1/14/19) – Caltrans is closing the Paul’s Slide and Mud Creek areas along Highway 1 in Big Sur at noon on Monday.

The temporary closures were called because the areas are prone to rock falls and landslides and there is a significant storm system in the forecast.

Caltrans says its crews are on call to inspect the highway and clean up any debris once the storm ends, but that may not be until the morning of Friday, Jan. 18.

Nacimiento-Ferguson Rd. is the only way to reach Highway 1 between the two closures. However, Caltrans notes there is a 40-foot length, 12-foot height, and 60-ton weight restriction at one of the bridges along that road. 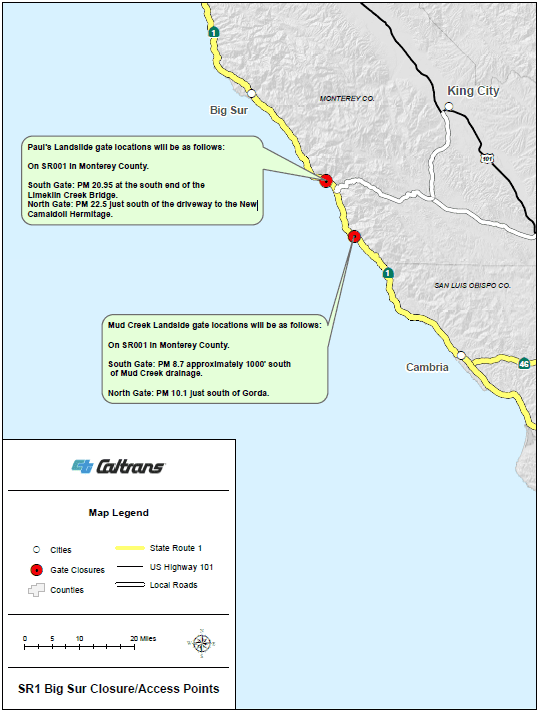 The closures are part of Caltrans’ storm plan formulated after the Mud Creek area was reopened last July. The 1/4-mile section of Highway 1 north of Ragged Point had been closed for more than a year due to a massive landslide.

Gates on both sides of Mud Creek and Paul’s Slide have since been installed and when a significant storm is expected, Caltrans can close the gates as a safety precaution.