UPDATE: Portions of Hwy 1 in Big Sur expected to remain closed until Tuesday

UPDATE (2/4/19) – Caltrans says the closures on Highway 1 at Mud Creek and Paul’s Slide in Big Sur will continue until Tuesday, Feb. 5, because of continued heavy rainfall.

It is unknown exactly when the roadway will be reopened.

UPDATE (2/1/19) – Caltrans confirmed Friday that it will close two sections of Highway 1 through Big Sur at 5 p.m. as a safety precaution because of an approaching storm system.

The closure includes the Mud Creek and Paul’s Slide areas.

Caltrans expects the closure to remain in place until Monday, Feb. 4. 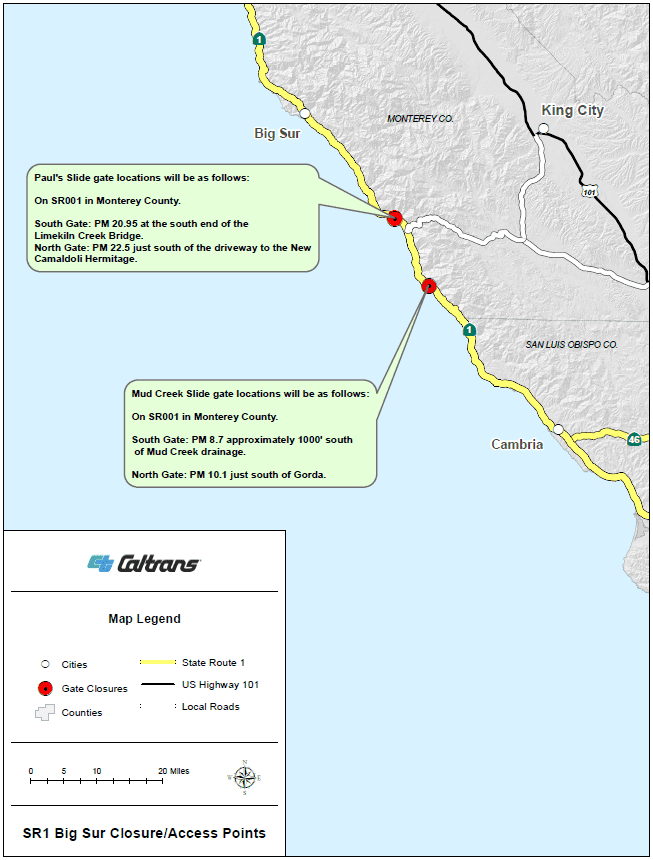 (1/31/19) – Caltrans plans to close sections of Highway 1 in the Big Sur area Friday because of the latest storm system forecasted to hit the Central Coast.

The areas of Mud Creek and Paul’s Slide are scheduled to close at 5 p.m. on Friday.

Those sections of the highway are particularly prone to rock falls and landslides and the closures are part of Caltrans’ storm plan formulated after the Mud Creek area was reopened last July. The 1/4-mile section of Highway 1 north of Ragged Point had been closed for more than a year due to a massive landslide.

Gates on both sides of Mud Creek and Paul’s Slide have since been installed and when a significant storm is expected, Caltrans will close and lock the gates as a safety precaution.

Caltrans says its crews are on call to inspect the highway and clean up any debris once the storm passes.