San Luis Obispo County Public Works crews have been keeping busy with nearly double the amount of calls they typically see after a storm.

Countywide, water has made at least eight roads unsafe to pass, prompting closures. 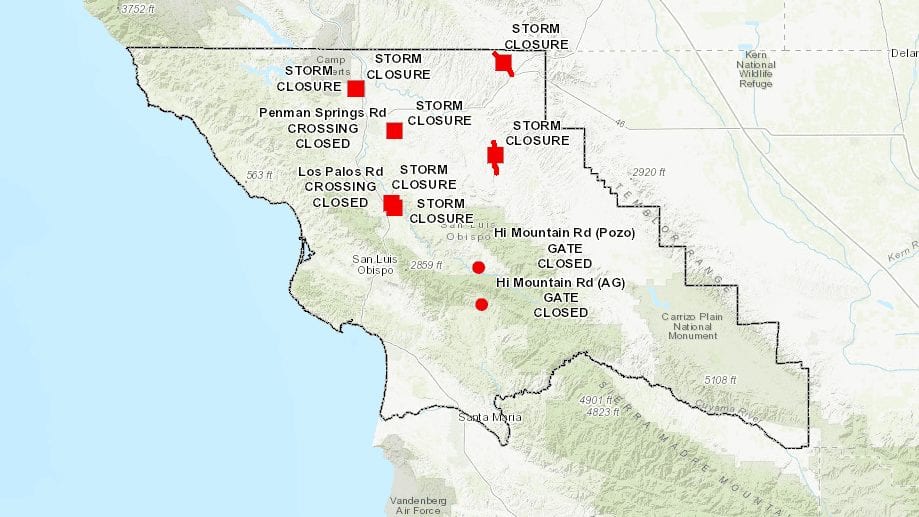 “In the past, some of those issues that we see with some of this minor flooding, those issues go away within 28 or 48 hours with no long-term residual effects,” Roberts added.

Fifty-seven public works road crews were stretched throughout San Luis Obispo County to clear out debris and post road closure signs, some of which are ignored. Crews will likely be clearing debris and fallen trees for up to two weeks.

A washed-out Halcon Road in Atascadero brings a lot of visitors; however, the road isn’t the responsibility of the city or the county. It’s privately maintained.

“It’s always funny to see that they try to build it up and try to detour the water every time and it doesn’t work,” said Susan Snyder, an Atascadero resident who was watching the Salinas River with her daughter.

“We like to come down when the road gets closed. It’s kind of a yearly right of passage,” said David Buck-Moyer, an Atascadero resident who lives near the road closure.

While the road closures require a detour, residents like Buck-Moyer are viewing it as an adventure rather than an inconvenience.

Authorities are asking drivers not to take the risk of driving through flood waters. Six inches of water is enough to move a vehicle.

SLO County Public Works asks residents who find road issues to give them a call. They’ll respond as soon as they are able.