For the first time after abruptly resigning during Tuesday’s meeting, former Grover Beach City Council member Debbie Peterson is talking about the allegations of bribery and corruption she’s made against the city council.

She says there’s a number of reasons behind her resignation with one of them being how the city council has allegedly handled the cannabis industry.

“My concern about the cannabis is that there were a lot of good local applicants even local to Grover Beach who had clean backgrounds and those people didn’t get a look in. Every cannabis company that was chosen, had issues with their backgrounds so not giving anything away that I can’t give away and that concerns me,” Peterson said.

In a letter addressed to Mayor Jeff Lee and members of the City Council on Tuesday she said, “Many members of the community and the cannabis industry report that some dispensary applicants paid council members and their consultant to get their licenses approved.” 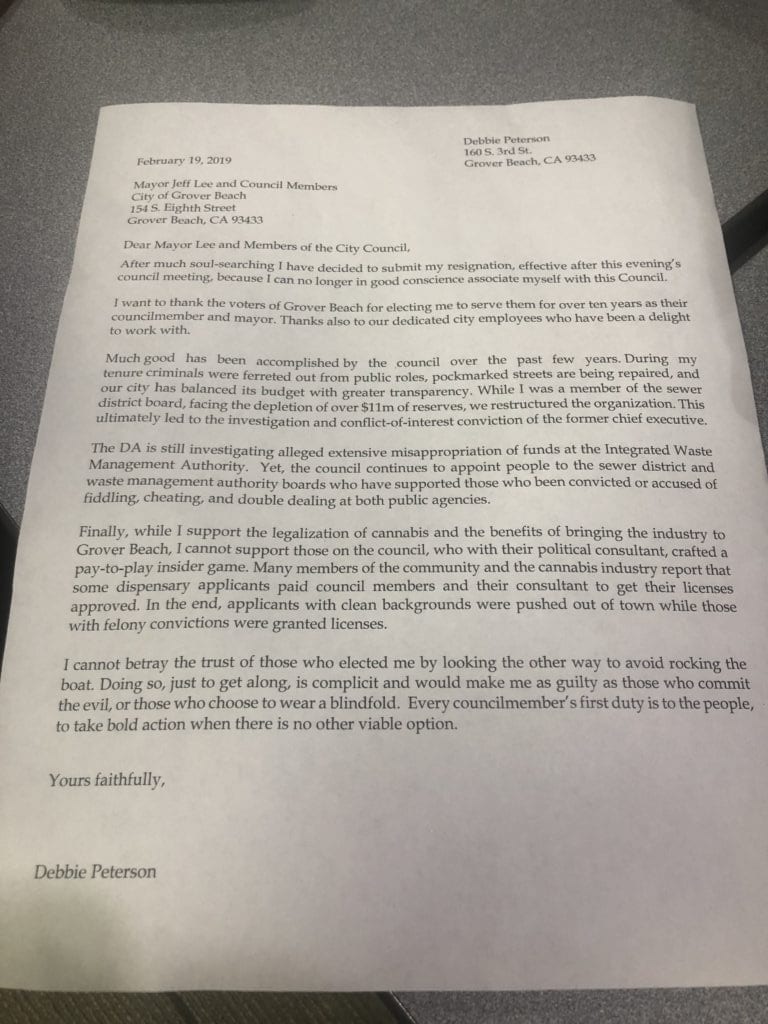 “I’m hearing it from credible sources from different credible sources and I don’t want to be involved in that,” Peterson said during an interview with KSBY on Thursday. “I don’t know which of the four chosen dispensaries people are referencing. It’s been a more general, if you want to have a dispensary in this city you have to pay x amount of money to the mayor.”

Peterson would not reveal her source to KSBY but she says the people that are making these claims are afraid and they won’t talk.

“What I heard was $100,000 to (former) Mayor Shoals and he divies it up and from more than one source,” Peterson said. “I’ve talked to people who have documented it with emails.”

She said Mayor Lee was allegedly involved as well.

“Categorically deny that because it’s categorically false,” Mayor Lee said in a sit-down interview with KSBY on Thursday. “So this is an issue that she tried to bring up during the campaign in the August, September time frame with no substance in reality, no basis in actual proof, nothing that would lend credence to what she was actually saying and it didn’t have legs during the election and it doesn’t have legs after the election.”

In a statement, Grover Beach City Manager Matt Bronson said, “The allegations made by Ms. Peterson against Mayor Lee and former Mayor Shoals are unfounded and have not been corroborated with any evidence presented to the City at this time.  It is premature for the City to conduct any investigation unless there is sound evidence about these allegations.”

Peterson said she also has an issue with Mayor Lee accepting campaign money from cannabis companies who had applications with the city to form cannabis businesses. Peterson said it’s “dark money” because some of the money was not identified under the cannabis applicant’s name.

“I’ve been fully above board and fully compliant with the FPC regulations and so no, I have never hid money or received money inappropriately,” Mayor Lee said.

She said it’s not city staff and it’s not all council members that led to her decision.

“I’m just saying I can’t be a part of it because I feel too much of it is rigged,” Peterson said.

She said that she had concerns as far back as 2013 with the sanitation and sewer districts. In her letter, she mentions the District Attorney’s investigation into alleged misappropriation of funds.

She said she’s reported her allegations to “higher authorities” but would not specify what that means.

“I’m disappointed in Debbie because obviously she and I have worked on this council for upwards of 8 years. We didn’t always agree on things. She went in a completely different direction that I think the voters of Grover Beach and her supporters expected her to so I don’t know why she feels necessary to come forward at this point,” Lee said.

Council member Mariam Shah told KSBY, “I have never seen ANY evidence to substantiate ANY of Ms. Peterson’s claims.  She knows that she can talk to me, the city attorney, the police chief, the city manager at any time.  Instead of reaching out to us or providing actual evidence of ANY wrongdoing, she chose to abandon her office.  A true public servant works to fix problems carefully, respectfully, methodically.  Her resignation and all of her actions surrounding it show that she is the opposite of that.”

Peterson added that she went into Tuesday’s meeting knowing that she was going to resign and that she’s talked to a lot of people before the decision was made.

In 2004, she started working for the city as a planning commissioner and also spent time as mayor. Her current term on the council was set to end in December 2020.

We reached out to former Mayor John Shoals who declined to comment because he’s a “private citizen.”