Power restored after more than 27,450 Central Coast residents left in the dark

UPDATE (9:35 p.m.)– PG&E representatives say power has been restored for nearly 27,500 customers who were without power for several hours Saturday night.

The outage happened after a third party, not associated with PG&E, fell a tree which damaged a transmission line.

More than 15,000 customers are without power in Santa Maria and Guadalupe, according to PG&E’s power outage map. 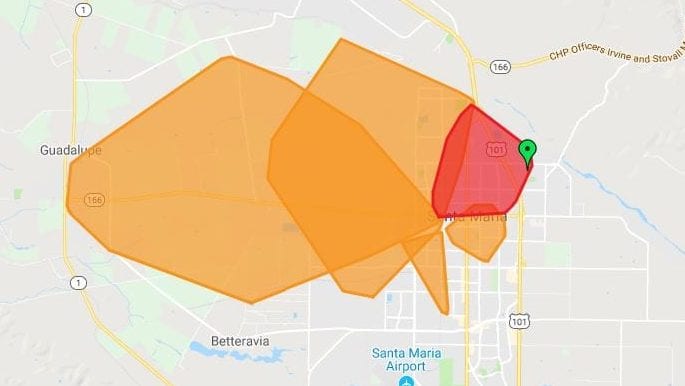 •PG&E’s most important responsibility is the safety of the customers and communities we serve.

•Earlier today a third party, not associated with PG&E, fell a tree which impacted a transmission line causing the outage.#SantaMarina @City_SantaMaria

PG&E said the cause was due to a “third party, not associated with PG&E, fell a tree which impacted a transmission line causing the outage. Estimated restoration has been set for 10:45 p.m.

Near Orcutt, an additional 5,500 outages were reported. Power went out around 6:45 p.m.

In Grover Beach and Oceano, the power went out for more than 6,800 residents around 6:30 p.m. The cause is unknown, but power is expected to be restored at 9:30 p.m.

The number of customers affected by the power outages is frequently changing.

KSBY reached out to PG&E for an update on the cause of the outage and will update this story as soon as more information becomes available.