Cortez is now facing charges of suspected driving under the influence and vehicular manslaughter.

The crash happened around 3 a.m. at the intersection of Donovan Rd. and Miller St.

Two people died in the crash and one person is in critical condition.

Santa Maria police said the two-car crash happened around 3 a.m. at the intersection of Donovan and Miller streets.

The police department said the white Jeep Grand Cherokee was going northbound on Miller St.  and the black Dodge sedan was going eastbound on Donovan St. when the crash occurred.

Lt. Russ Mengel said two people in the white Jeep Grand Cherokee were ejected from the car, one was a woman passenger between the ages of 18 and 20 who died, the other female passenger is in critical condition with life-threatening injuries.

He said the driver of the Jeep Grand Cherokee was not ejected but died from the crash.  Lt. Mengel said the surviving victim is in the same age range as the two deceased,

According to the Santa Maria Police Department, there were no passengers in the black Dodge sedan and no other vehicle or bystanders were involved. The police department said it is unclear if anyone was wearing a seat belt.

Lt. Mengel said it is unclear if either car ran a red light, which means it’s unknown at the moment which driver was at fault.  He said this is why Javier Artemos Cortes is not being held on any homicide charges, just charges of driving under the influence.  From a preliminary check of Cortes’ criminal history, Lt. Menge said it does not appear he has any history of DUI.

Home surveillance cameras in the area show vehicles moving through the area before and after the crash so the police department said detectives are trying to locate witnesses to get more details about the incident.

The car scene spanned over two and a half blocks.

Two people are dead and another is fighting for their life following a suspected DUI crash in Santa Maria overnight.

Santa Maria police say it happened shortly after 3 a.m. at the intersection of Donovan and Miller streets involving two vehicles. 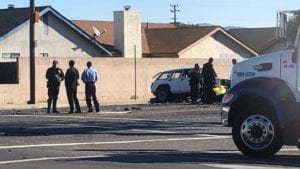 Police confirmed to KSBY News that two people in a Jeep Grand Cherokee – women estimated to be between the ages of 18 and 20 – died in the crash. A third person is reportedly in critical condition. Police did not know the condition of a fourth person in the vehicle.

The driver of the other car, a Dodge sedan, was arrested for DUI. Javier Artemio Cortes, 27, of Santa Maria was booked into the Santa Barbara County Jail on DUI charges, police said. Cortes was not injured.

Cortes may face additional charges when the investigation is complete.

The intersection remained closed as of 10:05 a.m. 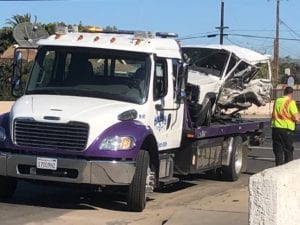 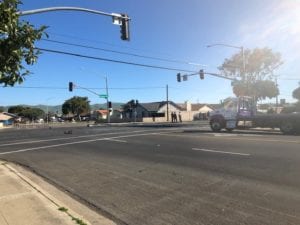 A woman who lives at the intersection said the crash woke her up. “It sounded like an explosion or an earthquake. I knew there must have been a big crash out there,” Carol Gantus said.

Police say they are unable to release the identities of the two people who died and next of kin has not yet been notified.