There’s growing concern after parents with children in the Atascadero Unified School District learned the weed killer Roundup was set to be used at an elementary school.

It was scheduled to be applied at Carrisa Plains Elementary School this weekend.

Once parents got word, they reached out to KSBY News after they say they were having trouble getting in touch with the district.

A sign notifying the public of the spraying was posted on the fence at Carrisa Plains Elementary School. 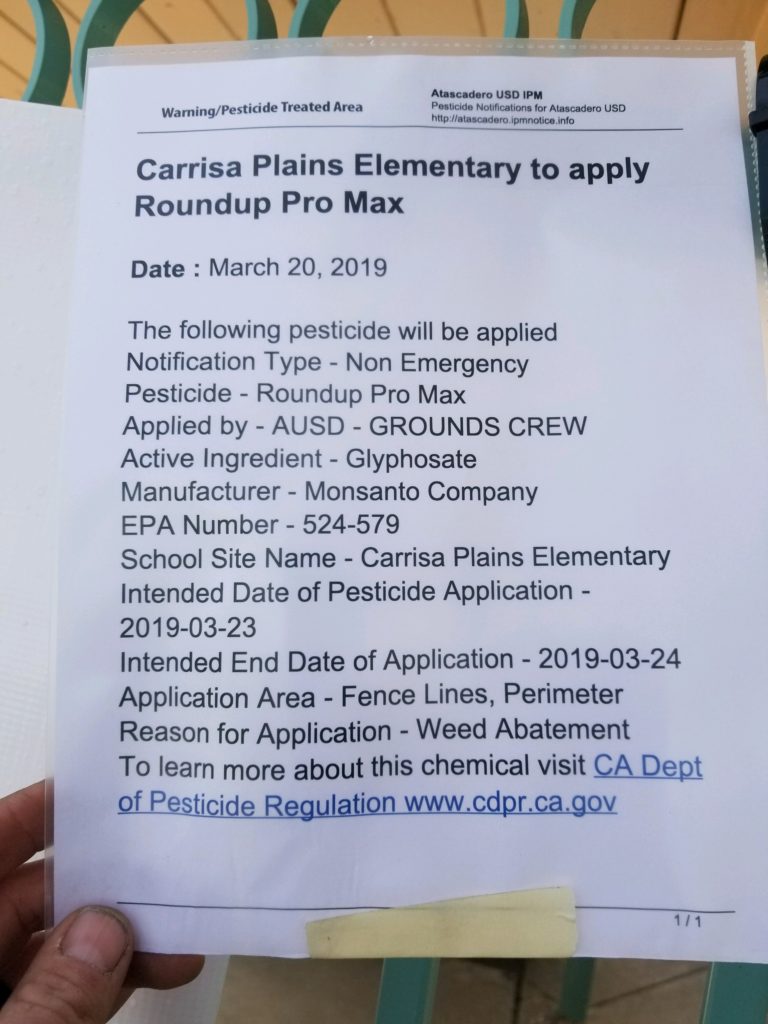 “It said that they were going to be spraying Roundup, glyphosate, and that it was going to be used for weed abatement around the perimeter and the fencing,” said concerned parent Ben Reed.

Reed says he received a letter at the beginning of last school year stating that pesticides would be used. At the time, he says he expressed his concerns.

“They said they were looking for solutions and they were going to try to remedy the problem coming into the next school year,” Reed explained.

On Friday, he spotted the Roundup notice for the first time.

“I was shocked and a little bit angry. The solutions are there and we’ve known about this a long time,” Reed said.

This week, a federal jury found Roundup to be a factor in causing a California man’s cancer.

“There isn’t just this case but there are thousands of cases that are pending in courts around the country,” said David Levin, UC Hastings Law Professor.

Other parents we spoke with who have kids in the school district also had strong feelings about the weed killer.

“I don’t want my kids around that at all and if they do, I’m on the same page as some of the other parents that we’ll probably pull our kids out,” said Kevin Horn.

“I highly suggest that Atascadero look at alternatives to weed control,” said Crystal Gries. “Exposing our children to a known carcinogen and cancer-causing agent is absolutely 100 percent unacceptable.”

“Atascadero Unified School District complies with all EPA guidelines as well as California Department of Pesticide regulations when applying pesticides at our school sites.
We follow the proper notification procedures and post any and all pesticides that may be used throughout the school year along with their active ingredient in our Annual Notification to Parents each year.
No spraying or applications are ever done on a day when students will be present.
There are no scheduled spraying or applications for any school sites nor district facilities in the near future.
The District is currently in the process of reviewing our weed abatement procedures and continues to pursue safe and effective practices.
Atascadero Unified School District is dedicated to keeping students, staff and community safe and healthy.”

One of the parents we spoke with said they have a meeting with the district on Monday.

The company behind Roundup maintains that its product does not cause cancer. Monsanto is expected to be back in court for a third trial in Oakland next week.