Some people in Los Osos woke up to an upsetting sight — cars vandalized, hit with spray paint.

It happened on Woodland Drive not far from Los Osos Valley Road.

Most of them were in the 500 block of Woodland Drive.

The sheriff’s office says they were all parked on the street and tagged the same.

“It went from here all the way down to here so the whole side, actually,” said Mark Riggs, describing the spray paint on his car.

He woke up Tuesday morning to find his vandalized.

“I walked out to get something out of the car and I saw the spray line down the side of it,” Riggs explained.

In the 500 and 600 blocks of Woodland Drive, the sheriff’s office took reports, one victim after another.

“Just the idea that people are doing that in our neighborhood is kind of unsettling,” Riggs said.

Each vehicle was spray painted with a line of blue paint down the side of the vehicle. 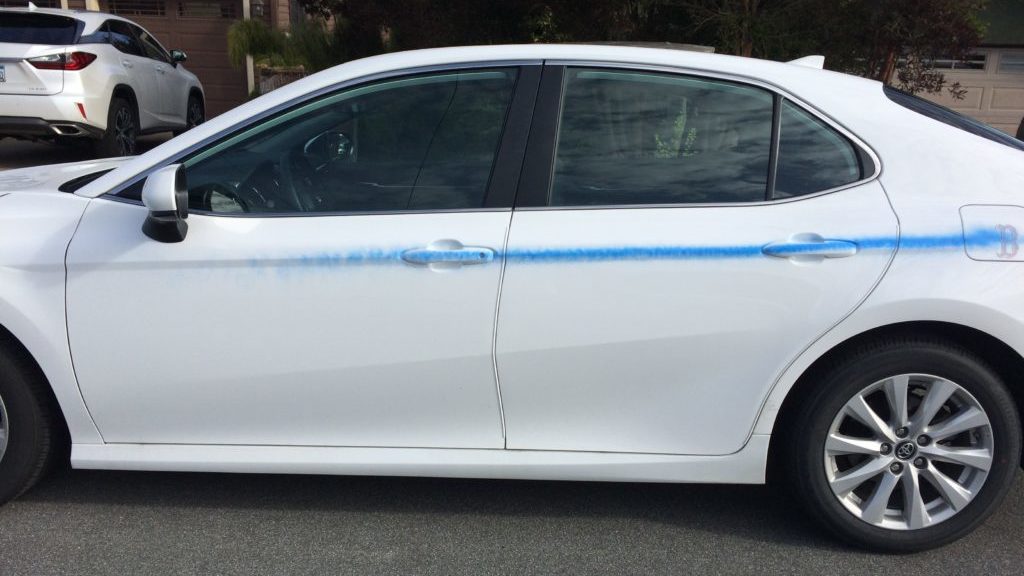 The sheriff’s office says it appears someone in a moving car did it as they drove down the street.

Neighbor Yvonne Ramos didn’t find her car sprayed but learning the news came as a surprise.

“Very quiet neighborhood and very out of the ordinary,” Ramos said. “I mean, don’t even remember the last time something like this happened that I have heard of.”

The victims we spoke with said they were able to remove the blue paint with some product and elbow grease.

“I was pretty upset but being a former painter, I was able to use a little chemical just to rub it off, buff it out by hand,” Riggs added.

Law enforcement says it appears to be random.

“That’s why it’s a shock. That people come and do this to destroy somebody’s property. It’s unfortunate,” Ramos said.

“It’s kind of a relief knowing that we weren’t the only ones targeted. There were other people so it was just a random act of kids out looking for trouble,” Riggs said.

The sheriff’s office says anyone with information should give them a call or call Crime Stoppers at (805) 549-STOP.