A 13-year-old Paso Robles girl is recovering after being bitten by a sea lion in Pismo Beach.

While this accident was an “anomaly,” given the sea lion was unprovoked, Fish and Wildlife says it serves as a reminder to always be cautious around wildlife.

For Megan Pagnini, last Friday was a fun beach day with friends now turned into a painful memory

“I was just kinda jumping around, dancing, just having fun and they were taking funny pictures of me and we were all laughing, and then a sea lion attacked me,” Pagnini said.

A photo taken by Pagnini’s friend shows what happened next. In it, you can see a sea lion charging at her in the water. 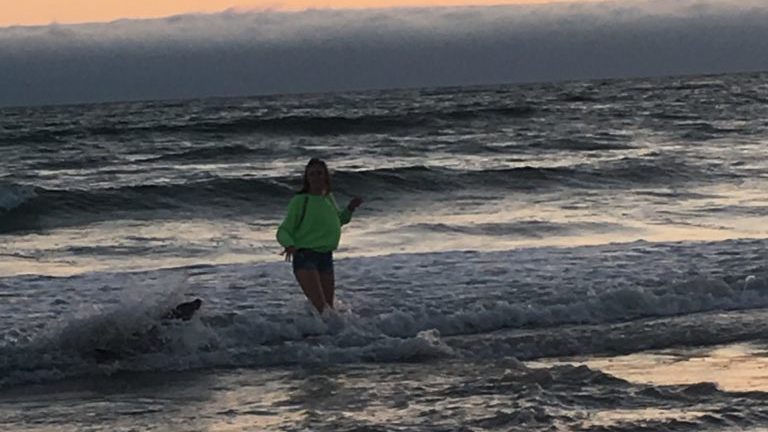 “I felt it on my leg and I looked down and freaked out. I didn’t know what it was. All I knew is something was attacking me,” Megan said.

People walking nearby quickly jumped in to help her, shocked that something like this could happen unprovoked.

“After her leg was wrapped up and everything, she turned, looked at my husband and me and apologized to us as if she had ruined our weekend and it really melted my heart that that little girl was worried about us in that moment,” said Nicki Thessen, one of the first people to help Megan on the beach.

Megan was taken to the hospital and received antibiotics to fight the bacteria that might have been transferred from the infected sea lion.

Her mother says hospital staff told her they had never seen someone come in after having been bitten by a sea lion.

They say the sea lion’s erratic behavior didn’t stop with the attack on Megan and its illness is likely to blame.

“We believe that was why the sea lion not only bit the person but then came on land and bit the metal lifeguard stand,” Capt. Tognazzini said.

Over the last week, dozens of sea lions, sometimes 10 or more per day, are washing up onto area beaches suffering from domoic acid poisoning.

The Pagnini family is now warning other families to be cautious at the beach this summer, as Megan says she’s not sure she’ll ever feel comfortable going back.

“I think I know if I ever do, I’ll be a lot more cautious about where I am and my surroundings,” she said.

While there’s potentially a long road to recovery ahead, Megan says she hopes to be recovered in time to play soccer when the season begins in August.