One Santa Maria block has gone more than two weeks without getting mail because of a postal carrier’s complaint about a loose dog.

Neighbors on Agnes Avenue say they’re frustrated that one person’s pet is causing all of them to be inconvenienced.

Out of fear of retaliation from their neighbors, some have asked to stay anonymous.

“The mailman sent out a letter saying that we were gonna stop our mail but then they couldn’t deliver our mail to tell us that we had that letter, so we had no idea until I went to find out why I wasn’t getting my mail,” said one neighbor who asked to remain nameless.

The letter says a mail carrier was attacked by a loose dog at one of the homes, forcing the USPS to stop delivering mail for the whole block. 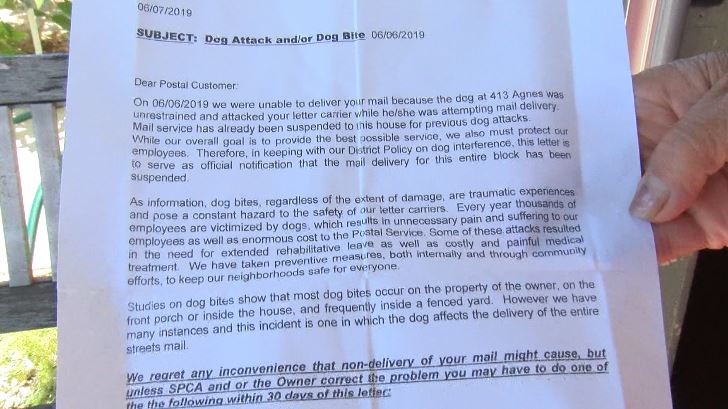 Neighbors we spoke to say it’s simply not fair.

“If they’re going off of one home and the whole block gets affected, I think they need to rebuild their action plan on how they deal with that,” said neighbor Oscar Maldonado.

Neighbors are missing out on more than just bills and letters. Some say they have medications that can’t be shipped to a post office box.

“I’m on chemo. It’s an oral chemo and that would come to me in the mail and now I’m getting my chemo and have to find another address for it to go to so I can pick up my chemo,” said a neighbor who asked to remain anonymous.

But the post office says the safety of their carriers takes precedence.

“(With) our letter carriers, their lives are the most important thing so we want to make sure that our letter carriers are safe, so that’s why this particular street isn’t receiving mail because this individual was attacked by a dog twice,” explained U.S. Postal Service Spokesperson Meiko Patton.

Santa Barbara County Animal Services says their hands are tied because they don’t have proof the dog actually attacked anyone and have made several visits to the home to ensure the owners are properly taking care of it.

“I’m not diminishing the fear the postal carriers had when they encountered the animal but what we can say is that the dog did not bite or attack anybody, so it’s really just the post office invoking their right to the policy of not delivering mail on a street where there’s loose dogs,” said Tara Diller, Santa Barbara County Animal Services Director.

KSBY asked the owners of the dog if they wanted to be a part of this story and they declined.

Both Santa Barbara County Animal Services and the Postal Service say they’re unsure when service to Agnes Avenue will be restored. Homeowners will have to continue to pick up their mail at the post office in the meantime.