Life isn’t all biscuits and gravy for one Pismo Beach restaurant.

The city is now asking for $72,000 in order for Beachin’ Biscuits to use its patio, and the business has started a petition to get the city to drop the fee.

One of the owners of the restaurant, Gina Mayo, says this space has always been outdoor seating and previous renters did not have to pay to use it. However, the city says they’re treating this business the same as they do everyone else.

In the six weeks since Beachin’ Biscuits opened, they’ve gained a lot of traction on Yelp and other social media sites, helping them sell around 300 biscuits per day.

“We love trying new things that are not like chain restaurants. We just went on Yelp and we were like, we have to go to the biscuits place because we love biscuits. I mean, how can you go wrong?” said Elaine Franco who is visiting Pismo Beach from Los Angeles.

Now, diners of the restaurant have been using social media to spread the word about a petition to allow Beachin’ Biscuits to use its outdoor patio. 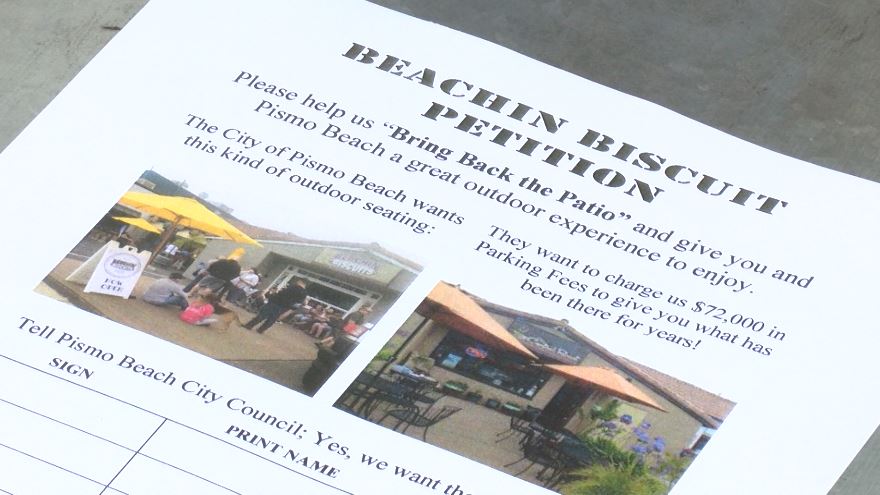 “I saw it last night and I figured I’d come here today to sign the petition because I think when people come to the beach and ocean on a day as nice as today, they’d rather sit outside and eat their breakfast than be indoors,” said Grover Beach resident Anthony Gonzales.

Co-owner Gina Mayo says the city is asking for $72,000 in order to use the patio, a space she says she desperately needs as her business continues to grow.

“We have a lot of people coming off the 101 to eat here and there are times on the weekend we have people sitting on the ground eating on blankets and I just don’t want that to be the impression of Pismo Beach,” Mayo explained.

But the city says if Beachin’ Biscuits wants to add to its square footage by using the patio, it has to pay for two additional parking spots to the tune of $36,000 each.

The city says the added parking spots can either be on-site, through a business arrangement with another business or through the city’s parking in-lieu fee.

“It’s not about having them pay that fee, it’s about providing the parking. Parking has been the number one priority for the community and city council,” said Jorge Garcia, Management Services Director for the City of Pismo Beach.

Mayo says she remains hopeful their petition will get the city to change their minds.

She argues the $72,000 is equivalent to three years rent.

“I rented this space because this was and always has been a patio and the restaurant itself is so small, it’s a disadvantage to the business to just use the inside space,” Mayo said.

She says so far, they have received around 1,000 signatures.

The next city council meeting is on August 6.