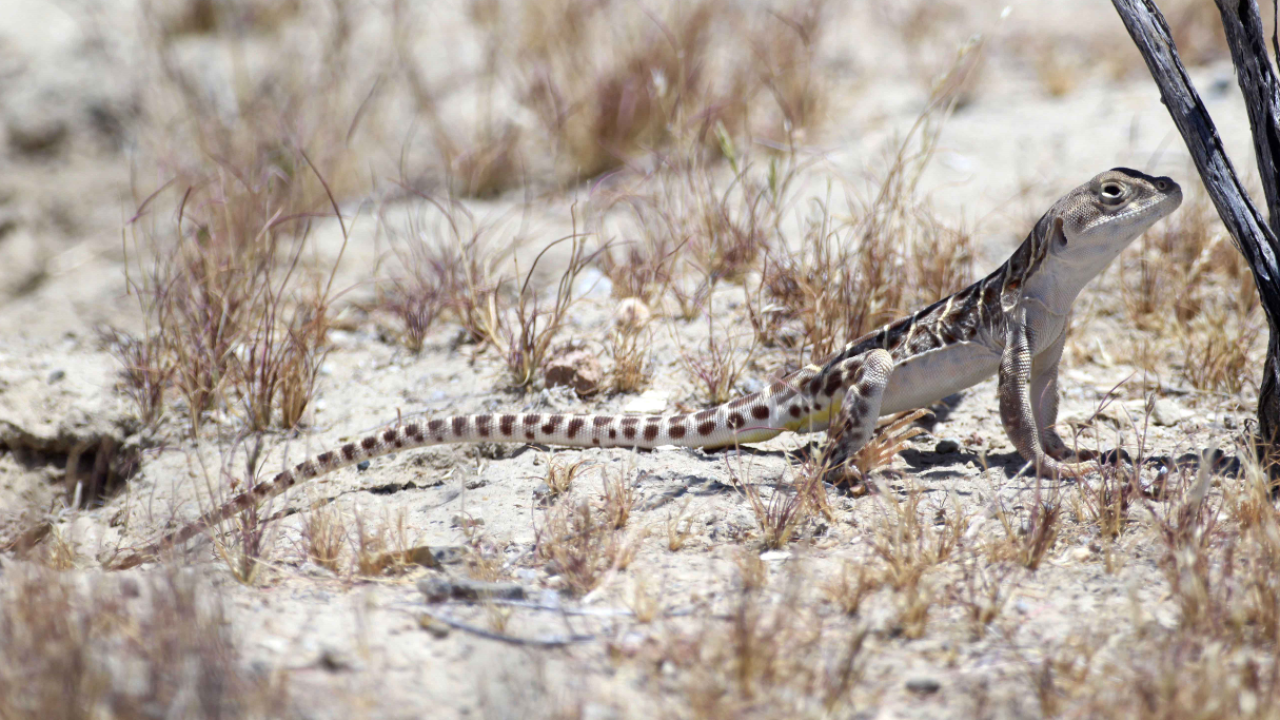 A new study from Cal Poly finds that an iconic lizard in the Carrizo Plain may be threatened by climate change.

The study was done by a team of scientists from Cal Poly, York University in Canada, and the U.S. Bureau of Land Management (BLM).

The scientists found that the soaring summer temperatures are forcing the blunt-nosed leopard lizards into underground burrows for much of the day, where they cannot mate, feed or defend their territories.

The study was led by Cal Poly biological sciences graduate student Kat Ivey and published in the journal Conservation Physiology.

Ivey predicts the lizard will lose additional hours of daily activity due to climatic change this century which could lead to uncertain outcomes for the lizard.

The blunt-nosed leopard lizard (Gambelia sila) used to range throughout the Central Valley and neighboring areas like the Carrizo Plain in San Luis Obispo and Kern counties. When most of its former range was converted for agriculture and oil exploration, the lizard lost 85% of that habitat, and it was listed as a federally endangered species in 1967.

These lizards are now living in an increasingly harsh habitat where conditions allow them to be active for only about three months per year for several hours per day. The scientists studied between 1992 - the first year for which temperature data is available in the Carrizo Plain - and 2019, and found that the average temperature, including nighttime temperatures, during the month of July has increased from the mid- 70s into the 80s with highs well above 100 degrees.

The Cal Poly study highlighted multiple ways to protect the lizards. It shows that currently the Carrizo Plain is split among BLM land, private land and other federal land, all of which are managed differently. The burrows that provide shelter for the lizards are created by giant kangaroo rats, which are also an endangered species whose habitat is only passively managed by BLM.

There are also small shrubs that provide shade for the lizard. The study says there has been some disagreement in the scientific community about whether these shrubs actually help the lizard. However, the study finds that the shrubs help the lizards increase their time spent above ground, where they can carry out essential life tasks.

"Our study shows managing these burrows and the shrubs could be an important factor in the survival of the blunt-nosed leopard lizards," Ivey said.

The scientists hope that their study can inform future management decisions on BLM land in the Carrizo Plain. Some of these future decisions might be geared toward conservation of the giant kangaroo rat that makes the burrows used by the lizards, evaluating BLM grazing practices and transplanting and managing the shrubs in lizard habitat.