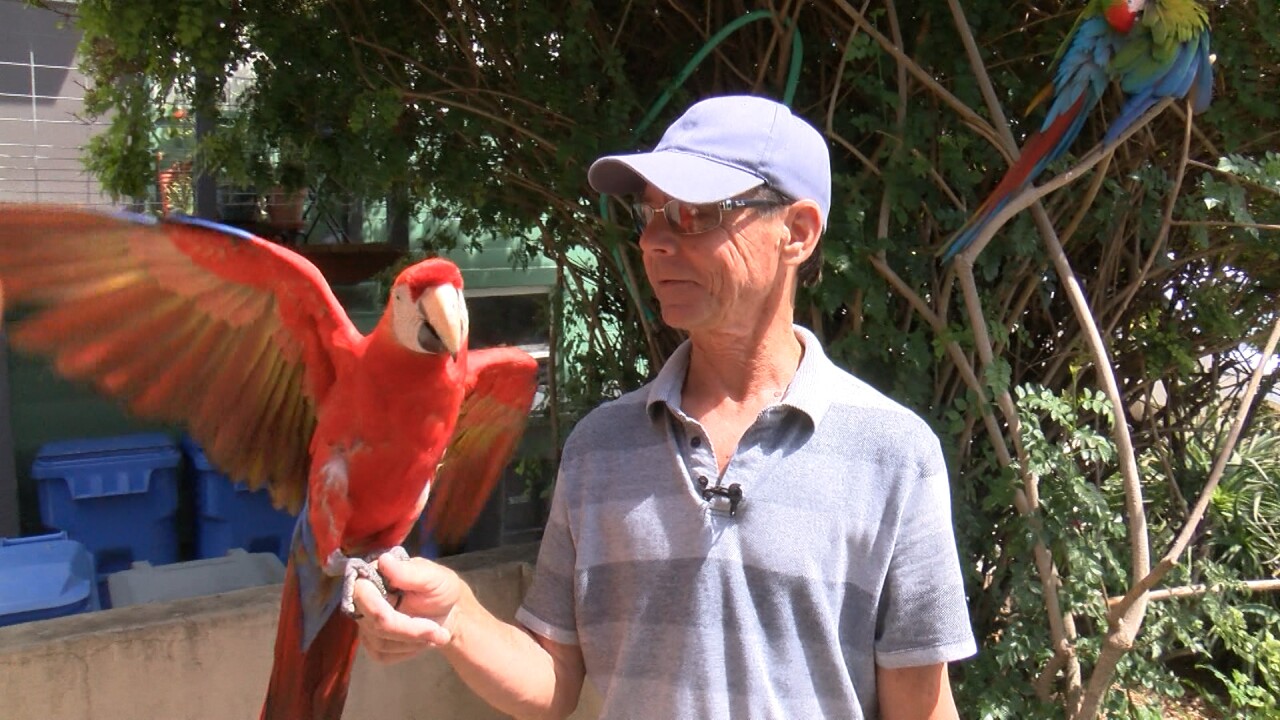 Vern Ludwick was born in San Luis Obispo over 65 years ago, and he still resides off Johnson Ave. He lives by himself, but his everyday company comes in the form of four, feathery pets you might have seen in the downtown area over the last decade. KSBY’s Neil Hebert has the story.

Vern has four, pet macaws: Rosita, Killian, George, and Tabasco, who is the eldest at 40 years old. If you’ve ever noticed colorful birds flying around downtown San Luis Obispo, this is likely the group.

He’s had these parrots for about 12 years, and they’ve been flying around downtown SLO for about eight.

Vern says the macaws are kind of like his children.

“You have to know that these guys require a lot of attention. It’s like having four, three-year-old kids; you can’t trust them for a minute,” said Vern, as one of the macaws waddled under his bed. “They’re going to get into trouble. They’ll destroy the house. My life revolves around taking care of these guys.”

Becoming enamored by something normally sprouts from a childhood memory, and Vern says that’s exactly the case for him.

“The front door was open, Christmas Day when I was about 1.5 years old. A little bird flew in the house and tried to go out the picture window, hit the window, and kind of knocked itself out. My dad picked it up, and my mother took a picture of my dad holding the bird,” said Vern. “From a very young age; now I’m ‘The Bird Guy.’”

They’re loud, but extremely smart creatures; they say phrases like “hello” and “goodbye” and “apple.” They cackle when they think something is amusing, and Tabasco can even say his own name.

I had a question for Vern about the macaws in flight: Are you afraid they’re not coming back?

“No. Never,” answered Vern without hesitation.

Vern says training them to return was quite tedious but worthwhile.

“Little baby steps; you have to get them to a point where they’re strong enough to fly and not crash into stuff. Then, you want to teach them where the house is. It’s a lot of footwork,” said Vern.

The exotic birds are beautiful in color and catch the eyes of passersby.

“Anytime anyone wants to come over and see the birds, you’re more than welcome,” said Vern.

“There they go. Bye, bye,” said Vern as his birds flew off into downtown San Luis Obispo.