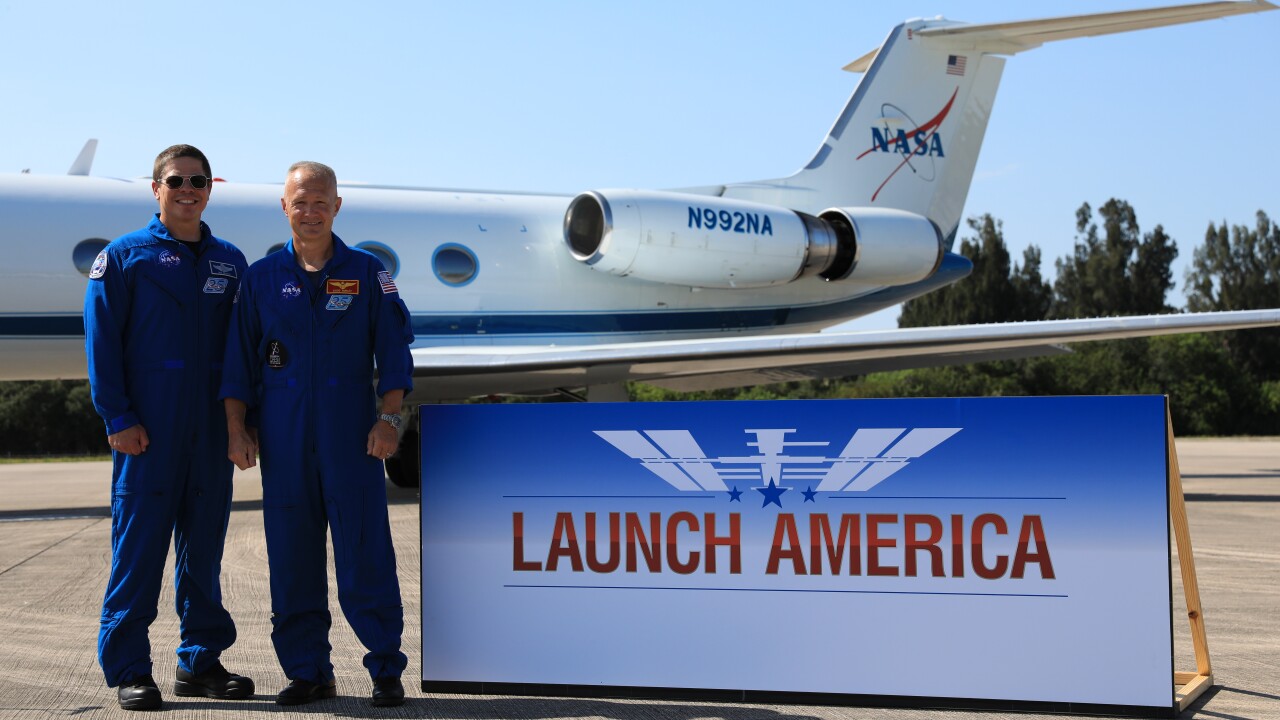 For copyright and restrictions, refer to http://www.nasa.gov/multimedia/guidelines/index.html
NASA/Kim Shiflett
From left, Demo-2 crew members Robert Behnken and Douglas Hurley pose for a photo after speaking to members of the media on May 20, 2020, at the Launch and Landing Facility runway following the crew’s arrival to the Florida spaceport.

CAPE CANAVERAL, Fla. (AP) — The two astronauts who will end a nine-year launch drought for NASA are now at Kennedy Space Center, exactly one week before their historic SpaceX flight.

NASA test pilots Doug Hurley and Bob Behnken arrived Wednesday afternoon in Florida after a flight from Houston on a NASA jet.

They're scheduled to lift off next Wednesday at 4:33 p.m. ET from the same pad where the space shuttle last soared in 2011.

That was the last home launch for NASA astronauts. This time, a private company, SpaceX, is providing the lift and the capsule.

NASA's commercial crew program has been years in the making.

The Demo-2 mission will test the SpaceX crew transportation system from launch to docking to splashdown, paving the way for its certification for regular crew flights to the International Space Station.

“We’re thankful for that opportunity,” Behnken said Wednesday. “We view it as an opportunity, but also, a responsibility – for the American people, for the SpaceX team, for all of NASA – who put this opportunity together and entrusted us with it.”

“I happen to have been one of the four astronauts who landed here almost nine years ago in T-38s on the 4th of July in 2011 to close out the Space Shuttle Program. It’s incredibly humbling to be here to start out the next [crewed] launch from the United States,” Hurley said. “I also want to thank the incredible men and women of SpaceX that have put so many thousands of hours of work into this rocket and spacecraft. We’re looking forward to getting up close and personal with Falcon 9 and Crew Dragon in just a few days.”

Next week’s launch will be the fifth time in American history that NASA has launched American astronauts on a brand-new vehicle.

“We did it in Mercury, Gemini, Apollo, we did it with the space shuttles, and now we’re going to do it with a SpaceX Falcon 9 rocket and Crew Dragon capsule; and it’s these gentlemen that are going to have the opportunity to pioneer once more for the United States of America,” said NASA Administrator Jim Bridenstine.

Thursday, NASA and SpaceX managers are set to conduct a flight readiness review at Kennedy to determine whether the Crew Dragon and its systems are ready for the mission.