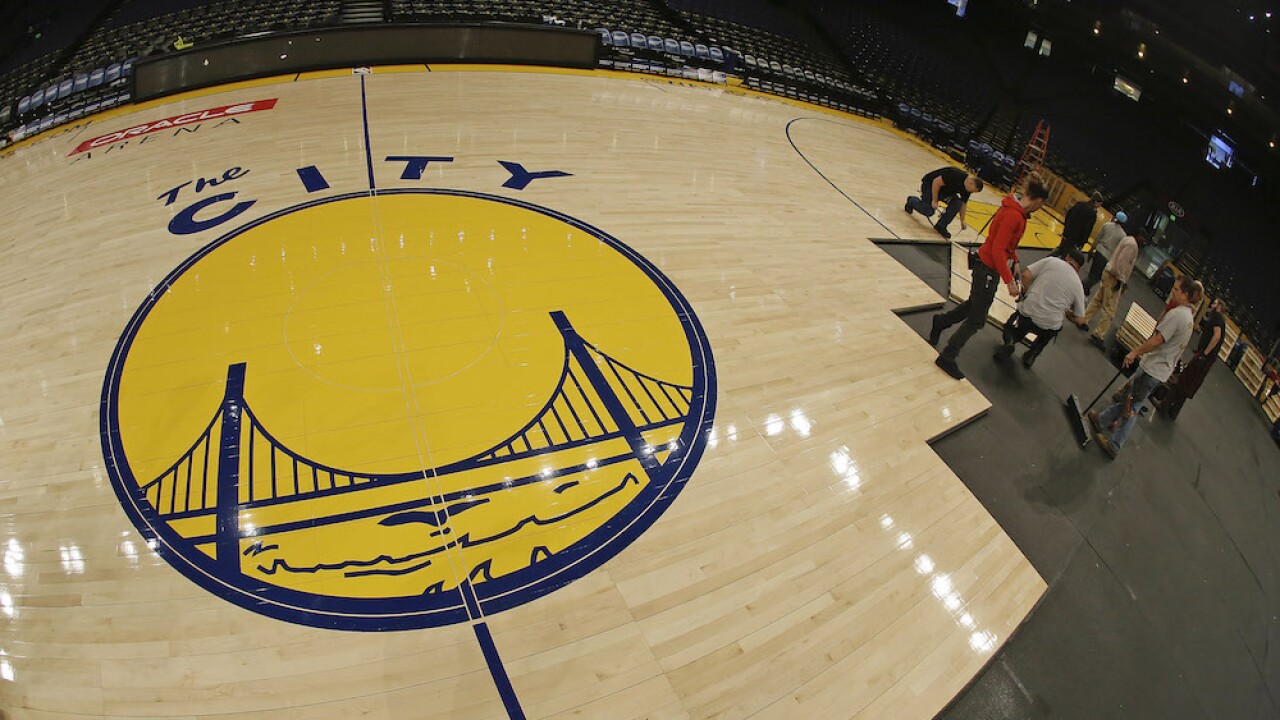 In this image taken with a fisheye lens, "The City" logo of the Golden State Warriors is displayed after being installed on the floor of Oracle Arena, Monday, Nov. 16, 2015, in Oakland, Calif. The Warriors are converting the floor for five Hardwood Classics Night games when the NBA team also wears "The City" jerseys. The logo dates to the 1960s and shows a silhouette of the Golden Gate Bridge. (AP Photo/Eric Risberg)

The Golden State Warriors are planning to comply with an order from the Health Officer of San Francisco than bans group events of more than 1,000 people amid the coronavirus outbreak.

"This is necessary to slow the spread of COVID-19, and builds on our previous public health recommendations," San Francisco Mayor London Breed said on Twitter when making the announcement.

While the Warriors are still planning on hosting tomorrow's home game against the Brooklyn Nets, they plan to do so without fans in attendance, the team said Wednesday. The team said it will refund tickets that have already been sold.

The NBA told fans last month that they should begin preparing to play games without fans if the spread of COVID-19 continued.

San Francisco's order comes a day after Ohio Gov. Mike DeWine asked that all indoor sporting events be played without fans in attendance. The NBA's Cleveland Cavaliers would be affected by such a request, but they do not play another home game until March 24.

In addition to the Warriors, the MLB's San Francisco Giants said Wednesday that they have canceled a March 24 exhibition game scheduled with the Oakland Athletics at Oracle Park, their home stadium.

Earlier this month, Los Angeles Lakers star LeBron James said he would not participate should the NBA choose to hold games in empty arenas. On Tuesday, he walked back those comments.

"Obviously, I would be very disappointed not having the fans, 'cause that's what I play for," James said. "But at the same time, you gotta listen to the people that's keeping track of what's going on. And if they feel it is best for the safety of the players, safety of the franchise and league to mandate that, then we all listen to it."