We have an interesting pattern of night and morning offshore winds with onshore afternoon winds which will continue the rest of the week. The crux of the forecast is figuring out the strength of the offshore and onshore components. Today the onshore is the slightly more dominant feature. It produced some cooling over yesterday and even some slight marine clouds.

Wednesday looks similar with more of the onshore. It’ll keep temperatures mild, but I say “mild” when it still means temps easily above average. 80s returns for the coastal valleys as early as Thursday with Friday thru the weekend showing 80-85 degree potential in the coastal valleys.

Inland valleys are an exception. This time of year they start to run cooler than the coast, and that’ll be the case in this forecast with mid to upper 70s most of the 7 days ahead with mostly clear skies. It’ll also be notable that the overnight lows will be cold. In fact, Friday-Tuesday morning lows could be near freezing.

Red Flag watches have already been posted for the Ventura thru LA area for developing offshore flow but we are not in the advisory because winds will not be strong enough…that said we will still be warm and dry and fire danger is significant. 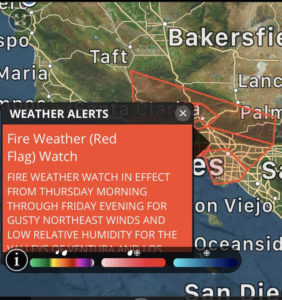 I don’t see rain before mid-month. The Climate Prediction Center’s 8-14 day precipitation outlook shows what the prospects for The West look like.

This is the American GFS model which shows rain potential on the 21st, yesterday it liked the 17th. It and other models are showing a tendency to a pattern break but not likely until after the 15th. Until then more warm and generally dry conditions are likely.  However these long range outlooks can change quickly, and I’ll advise you if they do.