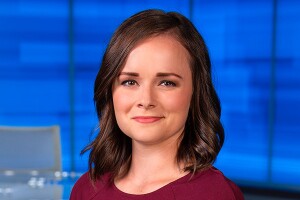 Aja’s first time on a television set was at the young and obviously very impressionable age of 5.

Her father ran audio for the local television news station in her home town of Lima, Ohio. The many opportunities to sit at the anchor desk and play in front of the green screen stuck with her, so she went on to The Ohio State University to study it for real.

Aja was the station manager for OSU’s BuckeyeTV and also an anchor, reporter, video editor and producer. She covered BIG 10 basketball and football, as well as campus crime and breaking news.

Aja joined the KSBY News team in June of 2018 as a multimedia journalist. She was previously a reporter and statewide noon news anchor with KSBY’s sister station, KTVQ, in Billings, Montana. She also interned at FOX News in Los Angeles, working closely with reporter and bureau chiefs. The experience afforded her the opportunity to cover everything from border wars to Red Carpet events.

One of Aja’s biggest passions is traveling and seeing new sights, so saying “yes” to the Central Coast was a no-brainer. Among her other interests are running, cooking and art. She loves meeting new people, jabbering and finding ways to laugh.