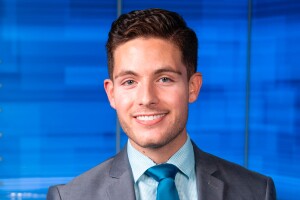 Alex Gonzalez joined KSBY News as a multimedia journalist in June of 2019.

Born and raised in Tucson, Arizona, Alex attended the University of Arizona where he graduated with two bachelor’s degrees – journalism and Spanish, with an emphasis in both Spanish and Portuguese. In his junior year, Alex traveled to the city of Fortaleza in Brazil where he stayed with a host family and fell in love with Brazilian culture.

Alex is completely trilingual and is of Mexican and Cuban descent. During his time in college, he was a member of the University of Arizona’s National Association of Hispanic Journalists. He also worked at the Daily Wildcat, the student-run newspaper, as a news reporter and would later on go to intern at both KVOA, the local NBC affiliate, and KOLD, the local CBS affiliate in Tucson.

Alex is excited to start a new chapter on the Central Coast… and is especially thrilled to be close to the ocean and escape the Arizona heat.

If Alex isn’t working, he most likely is at the gym, beach or on the phone with his family back at home.