The focus of Friday’s mass shooting is solidly on the vicitms. Most of the dozen killed worked at the Municipal Building in Virginia Beach. They are being remembered as loving brothers, sisters, husbands, wives, moms, dads and friends.

From NBC News – “They leave a void that we will never be able to fill,” said City Manager Dave Hansen.

Four others remained hospitalized on Sunday, three in critical condition and one in fair condition, authorities said.

A police officer was among the injured in the shooting, but the officer is doing well, having been saved by wearing a bulletproof vest, according to police.

Among those who died was Robert “Bobby” Williams, from Chesapeake. He was the longest-serving employee among the victims, having worked as a special projects coordinator for 41 years.

Laquita C. Brown, from the nearby city of Chesapeake, had been a right of way agent in the city’s public works department for 4-1/2 years. She was the kind of person who would bring in cupcakes when people were having bad days at work and was never in a bad mood, said Danielle Cyr DeFrias, a friend who worked with her at a previous job.

“She lit up the office every single day,” said DeFrias, who described Brown as a “bright spot in just about everybody’s day.

“She was a very kind, loving soul who cared about her friends and family,” DeFrias continued, adding Brown was very close to her mother and was a devout Jehovah’s witness.

DeFrias said one of her last conversations with Brown came after DeFrias’ brother died.

“She sat down with me and was very sympathetic and encouraging,” DeFrias said. “She gave me such a feeling of encouragement and peace in a very sad time.”

Christopher Kelly Rapp, an engineer from Powhatan, worked for the department for only 11 months, while Mary Louise Gayle, from Virginia Beach, served as a right-of-way agent for 24 years.

Nettleton always wore a jacket and tie to work and was a devoted husband a father, said Bob Sciacchitano, who knew Nettleton through the Hampton Roads Planning District Commission and considered him a longtime friend.

Other Virginia Beach residents killed in the public utilities office included Ryan Keith Cox, an account clerk for over 12 years; Joshua O. Hardy, an engineering technician for over four years; and Michelle “Missy” Langer, who worked as an administrative assistant for 12 years.

Herbert “Bert” Snelling, a contractor from Virginia Beach who was at the municipal building for a permit, was the only one among the 12 killed who was not an employee of the city.

Support is being provided to the families of victims as well as other city employees who were affected by the shooting, Hansen said.

The suspect, who was a longtime employee of the city, fired shots in every room of the building except for the basement, Virginia Beach police Chief James A. Cervera said at Saturday’s news conference.

CNN reports the family of the gunman, DeWayne Craddock, posted a handwritten message Saturday on their front door sending their “heartfelt condolences to the victims.”

“We are grieving the loss of our loved one. At this time we wish to focus on the victims and the lives (lost) during yesterday’s tragic event,” they wrote. “Our thoughts and prayers are with the families of those who (lost) their lives, and those recovering in the hospital. — The Craddocks”

Authorities said the gunman shot one person in a car on Friday before entering the facility and firing at people on all three above-ground floors.

The suspect was killed after being shot during what Cervera described as a “long-term gun battle” with police.

The motive behind the shooting is under investigation, he said. 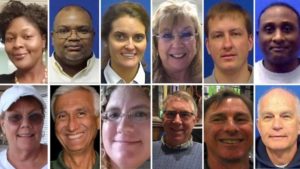