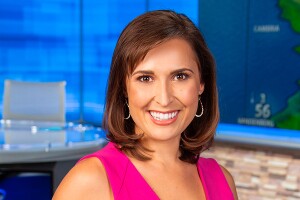 A native of the Central Coast, Brooke Martell has been with KSBY since January 2016. A graduate of San Diego State University, Brooke made her way back to the Central Coast following a year at KNSD that included her first job post-graduation as a writer and assignment editor.

Brooke initially started at KSBY as a multimedia reporter covering major events such as the Chimney Fire, Thomas Fire, and Debris Flow that killed 23 people in Montecito. She credits KSBY and the stories she's covered that have developed her love of storytelling.

In 2017, Brooke was awarded first place by the Associated Press and Radio Association for her coverage of the death of Andrew Holland, an inmate with schizophrenia who died at San Luis Obispo County Jail after being kept in a restraint chair for 46 hours. Brooke's first-place story detailed the changes the jail and San Luis Obispo County Behavioral Health vowed to make following Holland's death.

Today, you can watch Brooke's Microclimate Weather weekday mornings on KSBY News Daybreak from 5-7 a.m. In 2019, she returned to school at Mississippi State to work towards earning her meteorology seal to become a certified meteorologist.

Brooke loves to break a sweat, whether it be through a run, high-intensity interval training (HIIT) workouts, or going on hikes across the beautiful Central Coast. In her free time, Brooke loves to spend time with her family going on trips to Hawaii and wine tasting at all the incredible wineries across San Luis Obispo and Santa Barbara Counties!