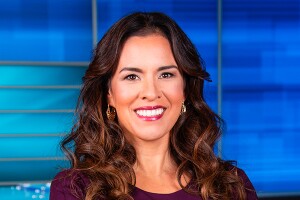 Carina Corral is thrilled to be back on the Central Coast as co-anchor of KSBY News at 5, 6, 10 and 11pm.

Carina started her career in 2002 at KIEM in Eureka, California as weekend anchor/reporter, before joining KSBY in July 2004 as the Santa Maria Bureau Chief. Most notably, she covered the four-month long Michael Jackson Child Molestation Trial. She then anchored KSBY’s weekend newscasts before becoming morning anchor in 2008. She spent four years helping the Central Coast wake up, before heading off to help residents of the Central Valley start their day as the morning anchor of the NBC affiliate in Fresno.

After three years, Carina and her family are back home on the Central Coast. Carina met her husband at KSBY, they got married in Pismo Beach and had their first child here. Now, they have three boys and a Boxer. Needless to say, the Central Coast has always held a special place in her heart.

Carina was honored with numerous awards for her work at KSBY including three Associated Press Mark Twain Awards for her anchoring during breaking news of the devastating Montecito Tea Fire of 2008 and the Tsunami Warning of 2011, and three Golden Mike Awards from the Radio and Television News Association of Southern California for health reporting and an investigative piece on a former Santa Maria Police Chief.

During her off time, Carina spends a lot of quality time with her family from exploring the outdoors to rooting on their favorite sports teams the Dodgers and the Raiders!