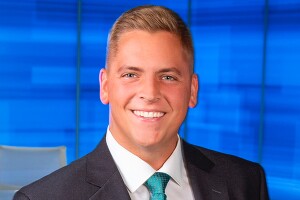 A proud cheesehead, Chance comes to KSBY all the way from his home state of Wisconsin. He’s excited to start a new journey here on the Central Coast.

A digital media broadcast graduate of the University of Wisconsin-La Crosse in 2013, Chance began his television career at WXOW-TV in La Crosse, WI as a sports photographer. In March of 2014, Chance moved north to Eau Claire, WI where he started as a Sports Anchor/Reporter for WEAU-TV. He says it was a humbling experience to have his family and close friends be able to watch his nightly broadcasts and stories.

While at WEAU-TV, Chance covered the Green Bay Packers and their run at two NFC Championship games, the Wisconsin Badgers men’s basketball trip to the Final Four and National Championship in 2015. He also covered the 2014 MLB Home Run Derby and All-Star Game in Minneapolis as well as various high school and college events around the state of Wisconsin.

In his free time, it is likely you’ll find Chance taking advantage of his new backyard – the Pacific Ocean, playing golf, and watching or attending local sporting events, while of course cheering on the Packers, Badgers, Brewers, and Bucks when the opportunity presents itself!

If you have a story idea for Chance or just want to say ‘hi’, feel free to send him an email, chance.dickman@ksby.com.