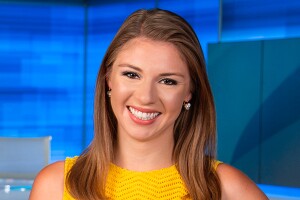 Christina Favuzzi is a multimedia journalist and co-anchor of KSBY News Daybreak weekdays from 5-7am. She joined the team in April 2015.

As a native of the Central Coast, Christina says she feels tremendously grateful to be working here as a part of the KSBY News team. Outside of work, she enjoys taking dance classes, hiking, rooting on her beloved Mustangs and spending time with family and friends.