UPDATE (10:45 a.m.) — The Women’s March from Mitchell Park through the streets of downtown San Luis Obispo is officially underway.

The march kicked off around 10:30 a.m. following a rally with keynote speakers and musical performances.

Thousands of people crowded the downtown streets, complete with signs and festive outfits to celebrate the march.

Wow look at how many people marching the streets for the WOMANS MARCH SLO. Marching in downtown area and making way back to Mitchell Park. pic.twitter.com/boICYkkLpj

U.S. Rep. Salud Carbajal (D-CA 24) is one of the many people leading the march.

U.S. Rep. Salud Carbajal (D-CA 24) has arrived at the march on Saturday. He, among many others, listened in to a speech from Women’s March organizer Dawn Addis.

Keynote speaker Nicole Brydson focused her speech around paying attention to the community and to everyone around us.

Keynote speaker Nicole Brydson talking about paying attention to the community and each other pic.twitter.com/7hUIMeTdpO

The march is set to begin following all of the remarks from the keynote speakers.

People ready to march at the Women’s March SLO. Rally starting soon so stay tuned for all your coverage on @KSBY #womanswave #WomensMarch2019 pic.twitter.com/qRrf2iRA72

The crowd is filling up Mitchell Park as they prepare to walk through the streets of downtown San Luis Obispo.

This is the third year a Women’s March is happening in SLO, and more than 100 cities nationwide are participating in the movement on Saturday.

The crowd at the San Luis Obispo Women’s March is starting to fill out in Mitchell Park. This is the third year of the March, which is taking place in over 100 cities nationwide, and SLO Women’s March leader Dawn Addis says the movement is gaining momentum. @beonksby pic.twitter.com/eRh0aaYlf4

UPDATE (8:57 a.m.) — The Women’s March in San Luis Obispo is about to begin Saturday morning.

Hundreds of people are gathering to join the Women’s March movement, which started a few years ago and has grown into a national event.

Booths and tables are set up with information about a number of organizations at the Women’s March SLO event.

The rally for the Women’s March starts at 9 a.m. at Mitchell Park, with the march following right after at 10 a.m.

An estimated 2,000 people are expected to gather in downtown San Luis Obispo for the third Women’s March.

The event starts at Mitchell Park at 8 a.m. A rally begins at 9 a.m., followed by a march through the downtown core. It will end back at Mitchell Park. The whole event is expected to wrap up by noon.

Speakers at the rally include Nicole Brydson, Leola Dublin Macmillan, and Rita Casaverde. Performers include Dian Sousa, A. Rosalind Crew, Noach Tangeras and Rachel Santa Cruz, and Leo Matthews. Samba Loca and SLO Action Figures will march with the crowd. Hot Tina is scheduled to perform following the march.

The theme of this year’s event is “Truth to Power.” Organizers say their mission is to advocate for women’s rights, human rights, and social and environmental justice.

“For far too long our truth didn’t matter. We won’t be silenced, shamed, ignored or erased any longer,” reads a post on the Women’s March San Luis Obispo website. “We march to speak truth to power, and to create space where speaking the truth is possible.”

Multiple street closures are in effect because of the march.

The following streets will be no parking, tow away zones from 6 a.m. until 1 p.m.: 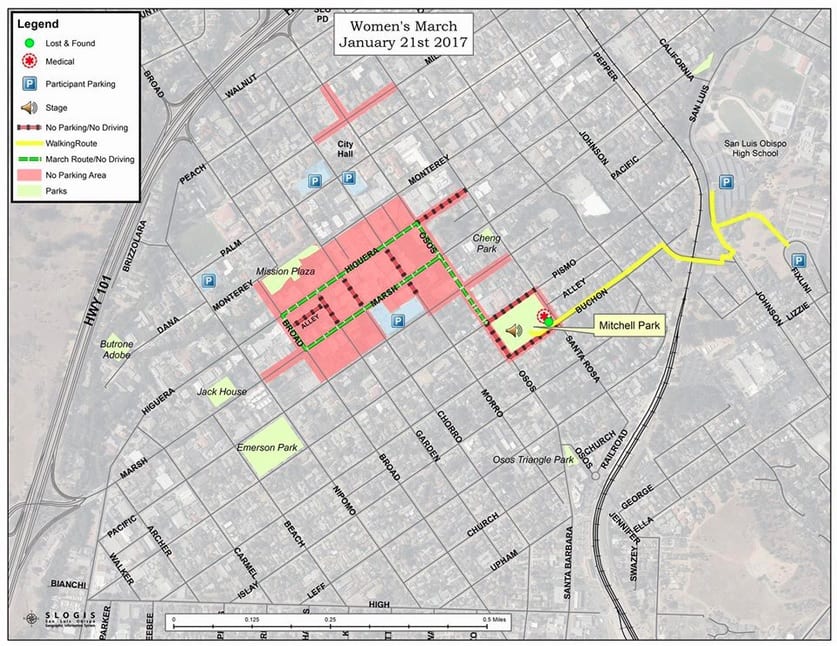 The San Luis Obispo Police Department says extra police officers have been assigned to patrol the event and the city has arranged for stand-by help from other area public safety agencies.