Valley Fever killed six people in San Luis Obispo County in 2018, according to the Public Health Department. Now, local scientists are working to develop a vaccine for this life-threatening disease.

Ann McDowell, an epidemiologist with the county, says Valley Fever comes from a fungus that grows really well in the soil in dry and arid places in the southwestern portion of the United States. That includes California and Arizona.

“In the fall when it dries out and the winds are blowing, we are going to see a lot of Valley Fever, so our highest number of cases occur in the fall and winter months,” McDowell said.

The disease can be worse than it sounds. What can often start with a fever, cough, headache, or other flu-like symptoms can often be misdiagnosed or lay dormant.

“Sixty percent of people who have been infected show no signs whatsoever,” McDowell said.

However, many are not so lucky.

Shell Beach resident Zoe Sunderland was diagnosed with Valley Fever in 1992 while living in Visalia.

“I actually started getting headaches to the point of not controlled by any kind of pain medications,” she said.

“What I’m getting now is the after-effect of the damage to my spinal cord and my brain,” Sunderland explained. 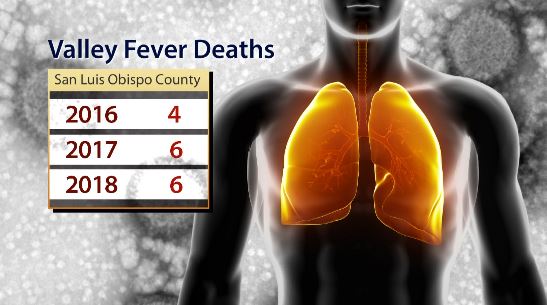 Doctor John Howard is the President of Applied Biotechnology Institute, a laboratory in San Luis Obispo that is working to develop a Valley Fever vaccine. His company and two other labs from the University of Massachusets and the University of Texas at San Antonio are behind the vaccine.

When it came to creating the vaccine, Howard says they wanted to “hit it with everything they could,” which means there are plans to create a vaccine that combines injectable and oral methods. However, in the long term, the ultimate goal is to create an oral vaccine on its own.

“What we’re doing now is trying to get ready to prepare all the pre-clinical work that the FDA requires to get into a human clinical trial,” Howard said.

He says the process could take one to two years, but if all goes as planned, the vaccine could be offered within three to five years.

Until the FDA approves a vaccine, getting tested for the disease if you’re showing signs or symptoms is the first step toward healing.

“It often takes more than two weeks to develop antibodies to Valley Fever so sometimes if you’re tested too early in the disease, you will test negative,” McDowell said. “So we recommend that you get tested four weeks to make sure that the test reliably detects Valley Fever.”

McDowell says with the heavy rain this winter season, she’s expecting a higher number of cases of Valley Fever in the upcoming fall and winter seasons.

As for Sunderland, while a vaccine might be too late for her, she’ll continue to fight her illness, turning her struggles into strength.

“If the only thing I can contribute at this point is helping other people with this illness, this is what I think I lived for,” Sunderland said.