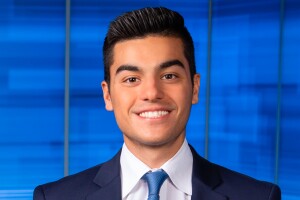 Ever since he was a kid, Michael knew he wanted to be in broadcast journalism, and is proud to make his dream a reality at KSBY and tell the stories of California’s Central Coast.

Michael also served as a broadcaster for LMU Athletics where he provided play-by-play, halftime and post-game analysis, and interviews for the basketball, soccer, and volleyball teams and hosted his own radio show and podcast, “On the Mike”, where he would discuss all things sports, interview athletes, and accept call-ins for KXLU 88.9FM in Los Angeles.

In his free time, Michael loves exploring the Central Coast as much as possible. He enjoys hiking, playing sports, heading to the beach, and trying out ALL the food SLO County has to offer. If you ever see Michael around the Central Coast, just say hi! He loves to meet new faces.