Some major changes could be on the horizon for a planned hotel and conference center in Grover Beach.

The Lodge at Grover Beach is set to go up in the vacant lot on West Grand Avenue near the entrance to the Oceano Dunes.

A conference center was also planned for the site but that may not happen anymore.

The project, set to be located in between Fin’s Restaurant and the Pismo Beach Golf Course, has been years in the making.

"It’ll be chaos," said Bruce Van Vort, who has owned the restaurant and golf course for 16 years. "It’s already chaos here on the weekends but it’s controlled chaos. It’s a chaos in which people can find a parking space. They can park in the dirt field if this is overcrowded."

The dirt field he’s talking about will be transformed into a 144-room, ocean view, four-star hotel.

"That field will clog up almost every weekend from this point on until August, the middle until the end of August, and even in the off-season now we see that parking lot on the weekends go 20, 30 percent more cars in there, filling that up," Van Vort explained.

San Diego-based Pacifica Companies, which partnered with the City of Grover Beach and California State Parks on the project, has asked the city to remove the 11,000 square foot stand-alone conference center approved back in 2014.

City Manager Matt Bronson says instead, there would be 4,000 square feet of meeting space inside the hotel.

With more space, Bronson says there will be more parking.

"There are a total of 375 spaces that will be provided as part of this project as it stands today. The minimum requirement was 311," Bronson said.

But the parking spots outside Fin’s Restaurant and the golf course will not change. They’re included in this number, according to Bronson.

Fifteen of the spaces will be for oversized vehicles like trailers for horses who ride on nearby trails.

"On the weekends, the beauty of coming out here is you can get a parking space," Van Vort said. 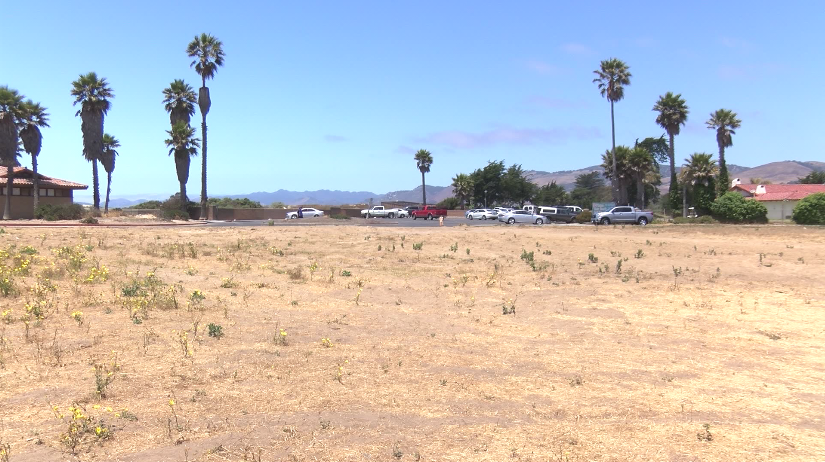 The Lodge at Grover Beach will be built on this dirt lot at the end of Grand Ave. (KSBY photo)

With construction looming, Van Vort hopes locals and visitors will both be able to enjoy the beachfront property in the years to come without any parking woes.

"Now if they can remedy the parking, I am all on board for this," Van Vort concluded.

A rooftop bar and restaurant on the fourth floor and a pool are also part of the plans.

The city adds that removing the conference center from the project will reduce the city’s costs from $10 million to $700,000.

Bronson also says the site plans could allow for a stand-alone conference center on the property in the future and that more parking would be added at that time.

The hotel is expected to generate $1.5 million annually for the city and State Parks.

The company has also asked for a one-year time extension to begin construction, which is expected to last two years.