Man accused of child molestation identifies as “the Antichrist” in court

UPDATE (11:50 a.m.) – San Luis Obispo police are now in contact with the owner of the car a young girl drove away in after being touched by accused child molester, Jonathan Davis, at a local gas station.

Update: Contact has been made with the owner of the BMW. Thanks everyone for the assistance! #slopd #onecommunity

The man accused of touching a young girl’s hair in a downtown San Luis Obispo store appeared in court Friday and told the court he is “the Antichrist.”

Jonathan Oscar Davis, 43, was arrested Monday after police say they received the report of him touching the girl’s hair at Sephora.

Police say after his arrest on Monday, employees of the Chevron gas station on Broad Street filed a report about Davis. Chevron employees told police on Saturday, June 23, Davis approached an eight to 10-year-old girl in the store at about 11 a.m., rubbed his fingers through her hair and then left. 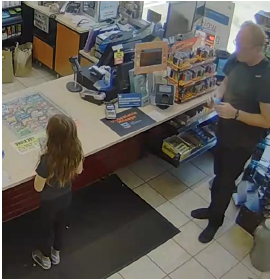 Officers are now trying to identify the victim at Chevron and believe her parents are likely unaware of the incident with Davis. The young girl was wearing a black short-sleeve Giants t-shirt and black leggings. She left in a white four-door BMW 5 series sedan.

San Luis Obispo police are asking anyone familiar with the victim, her family or the car, to contact them immediately.

SLOPD is seeking the owner of a white BMW 5 Series who was at the Broad Street Chevron on Saturday June 23, 2018. They may be the victim of a crime. Please contact SLOPD at 805-781-7312. #slopd pic.twitter.com/rA0wwt1mIl

Davis is charged in a felony complaint for annoying or molesting a child under 18 years old for Monday’s incident at Sephora.

When Judge Matthew Guerrero asked Davis Friday morning if his true and correct name is Jonathan Oscar Davis, he responded: “My name is the Antichrist.”

Judge Guerrero asked Davis whether he had ever been known as Jonathan Oscar Davis.

“There is no such person,” Davis told the judge. “There is only the Antichrist, the son of Satan.”

Judge Guerrero asked Davis if he had reviewed his rights and understood them. Davis questioned the meaning of “rights” and shook his head.

The judge appointed Davis a public defender to advise him of his rights and serve as counsel.

Judge Guerrero moved to suspend criminal proceedings due to questions of Davis’s competency. Davis will now be evaluated by a doctor and be back in court on July 19. He is being held without bail.

Judge moves to suspend criminal proceedings against Davis due to questions of his competency. Davis will be seen by a doctor and be back in court on July 19. @KSBY pic.twitter.com/RqallkavVU