The report shows wine grapes top the list of hot agricultural commodities grown or raised in the county in 2017.

The value of wine grapes increased 10 percent from 2016, setting a new record of more than $267 million. 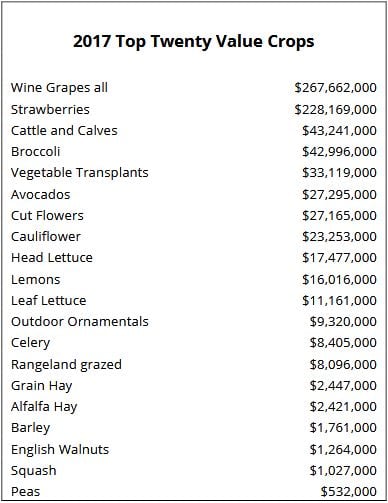 This is the second straight year wine grapes beat out strawberries, which remain the top crop in neighboring Santa Barbara County.

Strawberries were valued at $228.1 million in SLO County. The third-highest valued agriculture product is cattle and calves at $43.2 million.

The SLO County Department of Agriculture said rain complicated winter vegetable planting, leading to a drop in acreage and production.

Harvest labor shortages also reportedly hurt production. Although prices were up for most vegetables, yields were down, according to the county.