Brush fire breaks out off Highway 101 in Santa Maria

Firefighters were responding to reports of a brush fire Thursday morning along Highway 101 in Santa Maria.

According to the California Highway Patrol, it started just before 11:44 a.m. in the southbound lanes near the Santa Maria Way offramp.

Power lines were said to be down in the area.

The flames appeared to be knocked down by 12:15 p.m. but firefighters remained on scene. 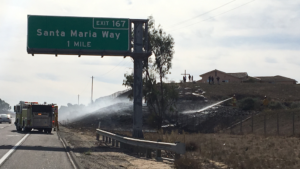