NBC Dallas-Fort Worth received a statement from former President George W. Bush, which reads: “Jeb, Neil, Marvin, Doro, and I are saddened to announce that after 94 remarkable years, our dear Dad has died. George H. W. Bush was a man of the highest character and the best dad a son or daughter could ask for. The entire Bush family is deeply grateful for 41’s life and love, for the compassion of those who have cared and prayed for Dad, and for the condolences of our friends and fellow citizens.”

President George Herbert Walker Bush was the 41st President of the United States. He guided the country out of the Cold War and led an international coalition into the Gulf War.

He was a World War II naval pilot who survived being shot down over the Pacific. He led the CIA and served as Vice President under President Ronald Reagan for eight years before taking the Oval Office himself.

H.W. Bush visited the Santa Barbara area while serving as Vice President to Ronald Reagan. Archived footage from the Ronald Reagan Museum shows the two having lunch and talking to members of the press at Rancho Del Cielo in the Santa Ynez mountains on August 6, 1984.

The Reagan Foundation released a statement on the death of former President George H.W. Bush

The Reagan Foundation joins our fellow Americans and people around the world in mourning the passing of former President George H. W. Bush. Today, we bid farewell to a true gentleman who embodied the nobility of public service.

During their eight years in office, President Reagan and Vice President Bush forged a remarkable partnership. As they reignited the U.S. economy, battled tyranny across the globe, and restored America’s pride and purpose, President Reagan relied on his vice president’s calm, strength, loyalty, and wisdom. In all that the administration achieved, President Reagan once remarked, “no one has been closer to my side and has contributed more to our success than George Bush.”

As president, George Bush built on this legacy, steering America through challenging times at home and abroad. Respectful of others, thoroughly devoted to service, and gracious even in defeat, he also solidified his reputation for integrity and decency.

Above all, President Bush treasured his loving family. They have our deepest sympathies and prayers at this difficult time.

H.W. Bush was a Republican who beat out Democrat Michael Dukakis in an electoral landslide with 54 percent of the popular vote.

He was the father of the 43rd President of the United States, George W. Bush.

George H.W. Bush’s wife, Barbara Bush, died in April. The two had been married for 73 years. They went on to have six children; George, Pauline (who was known as Robin and who died of leukemia as a child), John (known as Jeb), Neil, Marvin, and Dorothy.

Bush served a single term as president from 1989 to 1993. He lost re-election to Bill Clinton but watched his son become president eight years later. Only one other U.S. president, John Adams, had a son who also became president.

Houston Mayor Sylvester Turner on passing of former President George H.W. Bush: "George H.W. Bush served with valor and integrity as the 41st president of the United States. But to Houstonians he was one of our most esteemed and relatable neighbors." https://t.co/vR0ovfIKlI pic.twitter.com/jk1tCy43lE

California Lieutenant Governor and Governor-elect Gavin Newsom issued a statement on the passing of H.W. Bush.

“President George H.W. Bush, and his wife Barbara, exemplified public service through decency, civility and honor. He represented the best of the Greatest Generation, serving his country in battle and then, as a civilian, answering duty’s call anew. In public life he built bridges, championed the Americans with Disabilities Act, and stood with America’s immigrant communities. After his presidency, he was a voice for unity and civic engagement, leading the Points of Light Foundation and inspiring hundreds of thousands of volunteers around the country. The United States of America has lost a bright civic light tonight, and Jennifer and I send the Bush family and the nation our sincere condolences.” 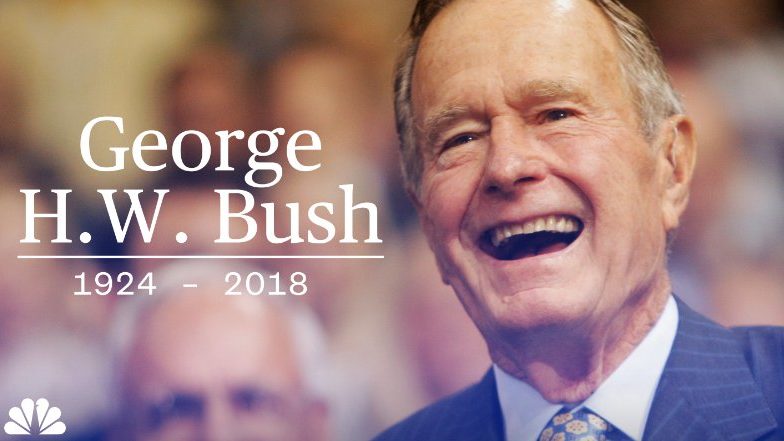