The alleged killer in what Lompoc police suspect was a murder-for-hire case was denied parole Friday and authorities now believe, some 30 years after the crime, they may have new evidence that could lead to charges against a new suspect.

Harold “Skeeter” Lyerla was killed in November of 1988 by Victor Perea, who came to Lyerla’s home pretending to inquire about real estate. 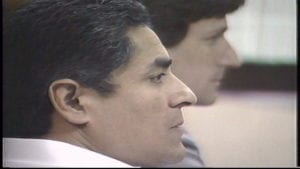 Lompoc Police Sgt. Kevin Martin said Sunday that Perea, who was denied parole Friday, brandished a knife and struggled with Lyerla before stabbing him several times.

“It does not appear Mr. Perea knew Skeeter at all and had very little if any association with Lompoc,” Martin said.

But Perea did know John Litchfield, the man Lyerla’s wife, Cynthia Knox was having an affair with.

In fact, police said Perea worked for Litchfield and lived on his property.

Though unproven in a court of law, Lyerla’s family said the connection is clear.

Pickarts described her uncle’s relationship with Knox as immediately red-hot, noting at the young age of 14 that her uncle was deep in love.

But that love story became a fatal attraction, Pickarts said, when Knox began having an affair with Litchfield.

Shortly after Lyerla and Knox wed, he was killed in his Lompoc home by Perea in what Pickarts believes was a murder for hire.

Knox and Litchfield married shortly after the murder and left town with the daughter, Kasja, she shared with Lyerla.

“What Cynthia didn’t know was when Harold took out the life insurance policy… they had a child, so after his death, she thought all that money was coming to her but only half did,” Martin said. “Suspiciously, Kasja dies before the age of two in a drowning incident in Goleta.”

Lyerla’s grandmother sued to block Knox from obtaining both life insurance policies, according to court documents but was unsuccessful.

With their new wealth, Knox and Litchfield moved to Texas to operate a party cruise line.

Meanwhile, Perea was convicted of first-degree murder and sentenced to 56 years in prison.

No charges were ever filed against Knox or Litchfield, but in 2016, Martin said there was a break in the case: federal authorities discovered Knox had been using the stolen identity of a baby who died the same day of her birth in 1992. Know had been introducing herself to passengers as “Christina White” and using the alias to obtain her mariner’s license.

She was caught using the fraudulent identity after the fingerprints she provided under the White identity for her mariner’s license came up as a match to the prints police took from Knox at the time of Lyerla’s murder.

Knox is serving a 3-year prison sentence for the crime and is expected to be released in 2020.

“I don’t know why the prosecutor at the time declined to file charges, it seems obvious to me (that Knox was involved in the murder), Martin said.

Just weeks ago, Litchfield passed away and from his Texas property, Martin said he’s developed new leads in the case. Martin did not elaborate on what the new information is but said his department is determined to serve justice.

But Pickarts remains cautiously optimistic, focusing her efforts not on Knox’s conviction, but on speaking out at Perea’s parole hearings. Pickarts attended such a hearing Friday, where she fought to keep Perea behind bars.

“I don’t think you can ever be prepared to hear those words: ‘we’re gonna grant you parole,'” Pickarts said. “Then we have nothing, absolutely nothing.”